Sheikh Mohammed bin Abdulrahman Al Thani said in an interview with France 24 Arabic on Thursday that Qatar had always “abided by international laws” and played a key role in the international coalition fighting the Islamic State of Iraq and the Levant (ISIL, also known as ISIS) group.

The foreign minister added that he expects to receive a list of demands from Saudi Arabia and the United Arab Emirates in the next two days, but stressed Qatar would not accept any “foreign dictations” and “rejected discussing any matter related to the Al Jazeera channel as it considered it an internal affair”.

Saudi Arabia, the UAE, Bahrain, and  Egypt severed diplomatic ties and cut off sea and air links with Qatar on June 5, accusing it of supporting “terrorism” – a charge Doha strongly denies.

As a result, Qatar’s only land border has been closed, it has been stopped from using the airspace of neighbouring nations and its citizens were ordered to leave the Gulf Arab countries.

The four countries also issued a list of 59 people and 12 groups with links to Qatar, alleging they have ties to “terrorism”. 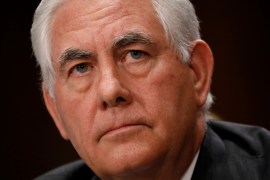