Bayrou’s centrist MoDem was in an alliance with Macron’s Republic on the Move (LREM) movement, which has promised to clean up and rejuvenate French politics.

MoDem is accused of using European parliamentary funds to pay assistants based in France.

“I have taken a decision not to be part of the next government,” Bayrou told AFP news agency on Wednesday.

Bayrou’s resignation comes a day after his fellow party member, Defence Minister Sylvie Goulard, stepped down, citing the investigation as the reason.

A third MoDem minister, Marielle de Sarnez, is also expected to resign, according to media reports.

The resignations came hours before a planned cabinet reshuffle that was initially expected to address adjustments and now must involve major changes.

“We have a majority after Sunday’s big win and we have the wherewithal to govern. So now it’s time to get to work,” Castaner told Europe 1 radio, referring to LREM’s sweeping win in parliamentary elections earlier this month.

A fourth minister under the conflict-of-interest allegations also left his cabinet post for a parliamentary job on Monday.

Richard Ferrand, a key LREM member, could face an investigation for alleged conflict of interest related to his past business practices.

Al Jazeera’s Natacha Butler, reporting from Paris, said the resignations may not be as disruptive to Macron’s government as they seem.

“It certainly doesn’t look good to have four ministers step down over corruption allegations in the same week,” she said.

“That said, you might say it’s not a bad thing for Macron because he can say he is cleaning up politics, and ‘I can’t have these people around me while they face such allegations’.

“In many respects, the fact that these ministers are stepping down now is perhaps not as disruptive as it might be at another time because of the planned reshuffle.”

Bayrou was a key backer of Macron’s movement during the presidential campaign, and his support was crucial in winning centrist votes for the new president.

He has dismissed allegations of corruption, saying there had “never been” fake jobs among his party’s European Parliament staff. 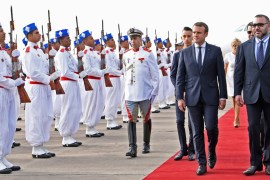 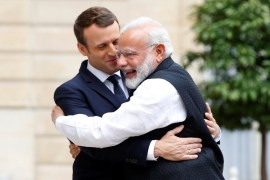 Macron and Modi express disappointment with US decision to pull out of the Paris deal, vowing to fight climate change.