Police in central India have arrested 15 Muslim men and charged them with sedition – punishable by life in prison – for celebrating Pakistan’s victory over India in the Champions Trophy cricket final.

The men, aged 19 to 35, were arrested in central Madhya Pradesh state’s Burhanpur district after locals complained that they shouted pro-Pakistan slogans and lit firecrackers after the match ended on Sunday night.

“We received a complaint from a local Hindu man who accused them of celebrating after India lost the match,” Burhanpur police chief Raja Ram Parihar told the AFP news agency.

The accused have also been charged with criminal conspiracy, the officer said, adding the celebrations continued for hours in the sensitive locality. The village where the incident took place has a 60 percent Muslim population.

The men were presented before a court on Tuesday and sent to jail pending trial.

In India, sedition is an offence which may result in the surrender of passports, ineligibility for government jobs, and even life imprisonment.

South Asian neighbours India and Pakistan have a history of hostile relations – and have a famous rivalry on the cricket pitch as well.

Cricket fans in both countries have been arrested in the past for supporting the rival teams or players.

Around 60 students from India were arrested on sedition charges after they were accused of celebrating Pakistan’s victory over India in 2014.

Last year, a Pakistani man was arrested for waving an Indian flag after his idol, Indian batsman Virat Kohli, made a match-winning century.

Millions of cricket fans in both countries avidly follow the proceedings on the cricket pitch, which often turn into tightly contested matches.

But on Sunday, Pakistan beat India convincingly to lift the Champions Trophy title in London, resulting in heartbreak for Indian fans.

Al Jazeera’s Lee Wellings, reporting from the final at the Oval stadium in the UK capital, said that only a few people saw this result coming.

“This is absolutely remarkable. Pakistan fans cannot believe the journey their team has taken,” he said.

“Pakistan is celebrating their biggest victory against their archrival.” 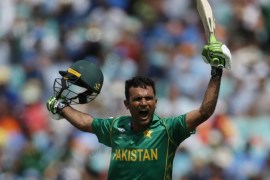 Pakistan lift their maiden Champions Trophy title after defeating their arch-rivals India by 180 runs at The Oval.