An estimated 70,000 cases of cholera have been reported by UNICEF in Yemen, with nearly 600 people dying over the past month, as the disease continues to spread at an alarming rate.

The UN agency, which provides humanitarian and developmental assistance to children and mothers in developing countries, said on Friday that the already dire situation for children in Yemen was quickly turning into a disaster.

“Cholera doesn’t need a permit to cross a checkpoint or a border, nor does it differentiate between areas of political control,” said Geert Cappelaere, UNICEF regional director, following his visit to the country, according to a statement on the agency’s website.

He gave warning that “the number of suspected cases is expected to reach 130,000 within the next two weeks” in the Arabian Peninsula country.

UNICEF said at least 10,000 cholera cases were reported in the past 72 hours alone.

Cappelaere described harrowing scenes of children who were barely alive – tiny babies weighing less than 2kg, fighting for their lives at one of the few functioning hospitals he visited.

“But they are the lucky ones. Countless children around Yemen die every day in silence from causes that can easily be prevented or treated like cholera, diarrhoea or malnutrition,” he said.

Cappelaere said health workers are racing against time to prevent cholera from killing more children, despite not receiving their salaries in almost nine months.

Yemen has been torn apart by conflict since 2014, when Houthi fighters, allied with troops loyal to former leader Ali Abdullah Saleh, captured much of the country, including the capital, Sanaa.

A coalition assembled by Saudi Arabia launched an air campaign against the fighters in March 2015 to try to restore the internationally recognised government of President Abd-Rabbu Mansour Hadi to power.

Since then, the conflict has killed more than 10,000 people, forced millions from their homes and pushed the country to the brink of famine, according to the United Nations.

UN officials say that without a pause in the conflict and without more financial resources, cholera will continue to spread across the country.

The UN has said that the unprecedented cholera outbreak in Yemen threatens the lives of 1.1 million malnourished pregnant women, who need immediate care and reproductive health services.

Almost a quarter of the Yemeni population needs urgent food assistance right now, according to the World Food Programme.

With millions of people on the brink of famine, those who are malnourished and have weak immune systems are at acute risk of succumbing to cholera.

Sanaa has been worst hit, followed by the surrounding province of Amanat al-Semah, WHO data has shown.

Cases have also been reported in other major cities including Hodeidah, Taiz and Aden. 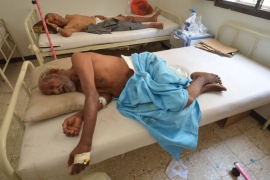