The number of people believed to have died from a fire that set ablaze Grenfell Tower in west London last week has risen to 79 and could increase, UK police say.

Five people who were reported missing have also been found safe and well, London Police Commander Stuart Cundy confimed on Monday, as Britain held a minute’s silence for the victims.

He also said only five people have been formally identified so far by police, after officers earlier warned that some may never be identified owing to the condition of the remains.

UK police had earlier put the toll at 58 presumed dead.

Theresa May, UK prime minister, is facing increasing pressure to take action after the 24-storey apartment building went up in flames on Wednesday.

May and her ministers have said they will do all they can to help those left homeless after the blaze and make sure other high-rise buildings, usually home to poorer people, are checked and safe.

May, criticised for keeping her distance from angry residents during her visit to the charred remains of the apartment building, said on Saturday that the response to the disaster had been “not good enough”.

She said more help will be sent to the scene to help survivors cope and find alternative housing.

Jeremy Corbyn, the leader of Britain’s main opposition Labour Party, called on the government to take over empty buildings to house the hundreds of residents displaced in the fire.

Corbyn said on Sunday that the government has the power to take over empty apartments and offer them to the hundreds of Grenfell Tower residents left homeless by Wednesday’s fire.

The cause of Wednesday’s blaze is still under investigation, but anger has mounted in the community amid reports that exterior panelling may have helped to fan the flames.

“If something needs to be done to make buildings safe, it will be done,” Philip Hammond, UK finance minister, told the BBC on Sunday.

“Let’s get the technical advice properly evaluated by a public inquiry and then let’s decide how to go forward.”

May has announced a fast-tracked public inquiry into the fire and said on Sunday that every household affected by the blaze would receive a minimum payment of £5,500 ($7,000) from a £5m emergency fund. 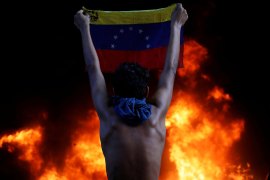 Week in pictures: From London fire to Mosul fighting

A photo round-up of some of last week’s key events, including the Grenfell Tower blaze and protests in the Philippines. 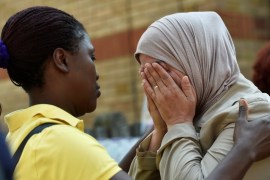 Anger is rising against British authorities over safety failings and a widely perceived slow release of information.