Saudi Arabia’s foreign minister says a list of “grievances” involving Qatar is being drawn up and will be presented to the Arab Gulf country shortly.

Speaking in London, on Friday, Adel al-Jubeir called on Qatar to respond to what he claimed were international and regional calls for it to halt its support for “extremism and terrorism”.

“I would not call them demands. I would say it is a list of grievances that need to be addressed and that the Qataris need to fix,” he said.

Jubeir did not detail what complaints could be made, but added that they will be presented “very soon”.

Four Arab states – Saudi Arabia, the UAE, Bahrain and Egypt – severed diplomatic and trade relations with Qatar on June 5, accusing it of supporting “extremism” and their regional rival Iran.

They later issued a list of 59 people and 12 groups with links to Qatar, alleging that they have ties to “terrorism”.

The Qatari government has repeatedly rejected the allegations of supporting individuals and groups blacklisted as “terrorists” as “baseless”.

It said that it has been leading the region in attacking what it called the roots of “terrorism” by giving young people hope through jobs, educating hundreds of thousands of Syrian refugees and funding community programmes to challenge the agendas of armed groups.

The Saudi-led bloc of nations cut off sea and air links with Qatar and ordered Qatari nationals to leave their countries with 14 days.

They also urged their citizens to return to their respective countries, disrupting the lives of thousands in the region and restricting their freedom of movement.

In his remarks from London, Jubeir said there was no intention of harming the Qatari people and called Qatar an “ally” in the six-nation Gulf Cooperation Council (GCC).

Saad Djebbar, an international lawyer based in London, told Al Jazeera that Jubeir’s comments exposed the regional ambitions of the four countries leading the blockade against Qatar.

“If there were any underlying grievances, that’s when you start the embargo. What this shows is that the Saudis, Emiratis, Bahrainis and Egyptians … they have no list – they just wanted to engage in a venture against Qatar,” he said.

“This embargo eclipses the one against Libya’s [ex-ruler Muammar] Gaddafi following the Pan Am airlines bombing – that embargo only afflicted air flights, not the seas and vessels or territorial borders.

“In fact, Qatar should provide a list of the material, financial and commercial damage caused by the embargo on them.”

Qatar imported the vast majority of its food from its Arab Gulf neighbours before the diplomatic shutdown, but has been talking with Iran and Turkey to secure food and water supplies since the crisis broke out.

Jubeir’s comments in London echoed the Saudi, Emirati, and Bahraini envoys to the United Nations, who affirmed on Friday that their recent moves to diplomatically isolate Qatar are within their rights to protect national security.

“Decisions to cut ties with Qatar are a sovereign right of the States concerned and aim to protect their national security from the dangers of terrorism and extremism,” they said in a joint declaration.

The statement came in response to remarks on Wednesday by Zeid Ra’ad Al Hussein, UN high commissioner for human rights, who expressed “alarm“ about the human rights impact of cutting off ties.

Separately, Ali bin Samikh al-Marri, chairman of Qatar’s national human rights committee, said the measures amounted to “collective punishment” and cited one case of a mother being separated from her baby.

This had led to “gross violations of human rights”, Marri said on Friday in Geneva, noting that every Qatari family had at least one member living in other countries in the region.

Cavusoglu travelled to Mecca, where Salman is based for the last days of Ramadan, after meeting his Kuwaiti counterpart on Thursday.

Cavusoglu was in Doha on Wednesday where he called for dialogue after meeting Qatar’s emir and foreign minister.

“We want to hear the views of Saudi Arabia regarding possible solutions and will share with them our views in a transparent way … We pay a great attention to our relations with them.”

Sheikh Sabah al-Ahmad Al Sabah, the emir of Kuwait, which has not cut ties with Qatar, has also been trying to mediate.

For his part, Rex Tillerson, the US secretary of state, has cancelled his scheduled trip to an Organization of American States (OAS) meeting in Mexico next week to stay in the United States and work on resolving the Qatar crisis.

Speaking to Al Jazeera, Tamara Kharroub, a senior analyst and assistant executive director at the Arab Center in Washington, DC, said Tillerson’s latest move is “a clear sign this is a priority and in the next week, we will see some serious efforts to mediate and resolve the conflict”.

“Now we hear from Saudi Arabia of a list of grievances, rather than demands,” she said.

“That, I believe, is a signal that Saudi Arabia is not intending to escalate this crisis any further … trying to lessen the issue from demands to grievances.” 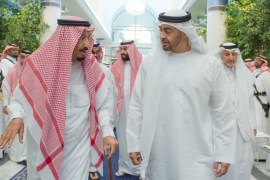 Saudi Arabia and the UAE are trying to solve their legitimacy issues by forming an anti-Qatari bloc.