Qatar will not cut gas supplies to the United Arab Emirates despite a diplomatic dispute between the two nations, the chief executive of state-run Qatar Petroleum has told Al Jazeera.

Saad Sherida al-Kaabi told Al Jazeera Arabic’s Liqa al-Yaum (Today’s Meeting show) on Sunday that although there was a “force majeure” clause in the Dolphin gas pipeline agreement – which pumps around 2 billion cubic feet of gas per day to the UAE – Qatar would not stop supplies to its “brothers”.

According to analysts and industry sources, a shutdown of the 364km Dolphin pipeline, which links Qatar’s giant North Field with the UAE and Oman, would cause major disruptions to the UAE’s energy needs.

Earlier on Sunday, the chief executive of Sharjah National Oil Corp said he did not expect flows of natural gas from Qatar to the UAE to be interrupted by the diplomatic dispute in the region.

Four Arab states – Saudi Arabia, the UAE, Bahrain and  Egypt – severed diplomatic and trade relations with Qatar on June 5, accusing it of supporting “extremism” and aligning with their regional rival Iran – charges that Qatar has repeatedly denied.

The Saudi-led bloc of nations cut off sea and air links with Qatar and ordered Qatari nationals to leave their countries within 14 days.

Qatar Airways, one of the biggest regional carriers, was forced to take long detours after it was barred from using Saudi, UAE and Egyptian airspace. 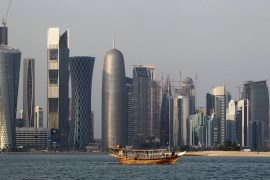 Qatar is the world’s leading LNG exporter, accounting for a third of international supplies – mainly to Asia and Europe.