Turkey’s foreign ministry has called in the US ambassador to Ankara, John Bass, for talks after US authorities issued arrest warrants for a dozen official Turkish security guards involved in a brawl with protesters in Washington last month.

“It has been conveyed to the ambassador that this decision taken by US authorities is wrong, biased and lacks legal basis,” the ministry said in a statement on Thursday, blaming local authorities for failing to take proper security measures with regards to the “so-called protesters”.

Speaking at a dinner to break the Ramadan fast in Ankara, Erdogan asked: “What kind of a law is this?”

Referring to his security detail, he said, “If they are not going to protect me, why would I bring them with me to America?”

Erdogan said the protesters were members of an outlawed armed Kurdish group and the US police failed to act.

He vowed to fight the decision on legal and political grounds.

Police say they’ve issued arrest warrants for a dozen Turkish security agents and two others accused of taking part in the violent altercation on May 16, which took place as Turkey’s president visited Washington.

Secretary of State Rex Tillerson said the charges “send a clear message that the United States does not tolerate individuals who use intimidation and violence to stifle freedom of speech and legitimate political expression.”

State Department spokeswoman Heather Nauert declined to say what actions might be taken, but the US could seek the extradition of the Turkish suspects or bar them from entering the United States.

Newsham recounted how video near the residence showed some attacking protesters with their fists and feet. Men in dark suits and others were recorded repeatedly kicking one woman as she lay curled on the pavement.

A man with a bullhorn was repeatedly kicked in the face. After officers struggled to protect the protesters and ordered the men in suits to retreat, several of the men dodged the officers and ran into a park to continue the attacks. 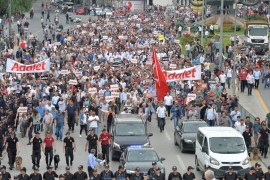 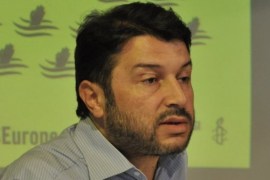