The Philippine government says its troops have taken control of 90 percent of Marawi city, after fighters who swore allegiance to ISIL seized it three weeks ago.

The latest news comes just a day after a politician said that residents fleeing the city had seen scores of bodies, as intense fighting between security forces and ISIL, or the Islamic State of Iraq and the Levant, continued.

“Dead bodies, at least 100, scattered around the encounter area,” Zia Alonto Adiong, a politician in the area who is helping in rescue and relief efforts, said on Thursday, referring to accounts he had received from fleeing residents.

The military said it could not confirm the report.

Thousands have been forced to leave their homes, as about 150 fighters are still putting up a fight in Marawi.

Rescuers fear that hundreds of people may still be trapped as fighting continues, and that many of them face starvation or have been killed in the crossfire.

Many of the displaced are currently living in evacuation centres across Lanao province.

The army has said 290 people have been killed in the fighting, including 206 fighters, 58 soldiers and 26 civilians.

Lieutenant-Colonel Jo-Ar Herrera, a military spokesman, said troops were advancing towards the commercial centre of Marawi, which is held by the fighters.

“We intend to finish the fight as soon as possible. Our tactical commanders are doing their best,” Herrera said.

But many of the remaining ISIL-linked fighters had taken up sniper positions, he said, complicating the advance.

“The battlefield is very fluid,” he said. 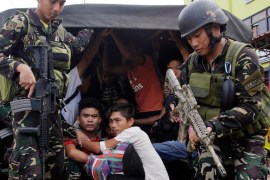