At least seven people were killed and 66 others wounded in an explosion at a nursery in eastern China, state media reported.

The blast occurred as children were being picked up from school in the city of Xuzhou in Jiangsu province on Thursday, police said.

It was not clear whether the explosion was an accident or was deliberately set.

The official newspaper Global Times reported on its website that the incident was caused by the explosion of a gas cylinder at a roadside food stall, citing a witness identified only by the surname Shi.

Mobile phone camera footage posted on the website of the official People’s Daily newspaper showed more than a dozen people lying motionless in front of the nursery’s steel sliding gate.

The force of the blast tore the clothes off some of the people lying on the ground beside pools of blood.

One woman was seen clutching her child, who was in tears. The video also showed ambulances arriving and medical personnel wheeling people into an emergency room.

The Xuzhou government said two people died at the scene and five others died at a hospital. At least four others were seriously injured, it said.

An official at the police station in Fengxian county told AFP news agency that the explosion was under investigation.

READ MORE: Wukan – The end of a democratic uprising in China

It is the latest tragedy to strike a nursery in China in recent weeks.

A school bus packed with nursery pupils burst into flames inside a tunnel in eastern Shandong province on May 9, killing 11 children, a teacher and the driver.

Officials later said the fire was intentionally set by the driver, who was angry at losing overtime wages.

In 2010, nearly 20 children were killed in attacks on schools, prompting a response from top government officials and leading many schools to beef up security with the posting of guards and the installation of gates and other barriers. Last year, a knife-wielding assailant injured seven students outside a primary school in a northern city.

China maintains tight control over firearms and most attacks are carried out using knives, axes or homemade explosives. 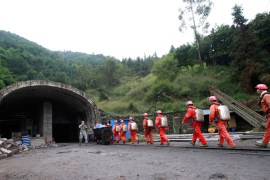 Unidentified substance leaked out and wounded another 37 mine workers at the Jilinqiao mine in Hunan province. 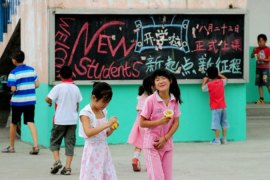 Deaths in attack near kindergarten in China