Fire engulfed a 24-storey housing block in west London, killing at least 12 people and injuring at least 68 others in an inferno that trapped residents as they slept.

Flames raced through the high-rise Grenfell Tower block of apartments in the north Kensington area after taking hold around 1am Wednesday (00:00 GMT) and witnesses reported many residents desperately calling for help from windows of upper floors.

The London Fire Brigade said 40 fire engines and 200 firefighters were battling the blaze which had engulfed all floors from the second to the top of the building.

London’s Mayor Sadiq Khan said “a lot of people” were still unaccounted for more than eight hours after the fire was reported.

“Unfortunately, there have been a  number of fatalities,” Danny Cotton, Commissioner of the London Fire Brigade, said. “It’s a major fire that has affected every floor from the second floor upwards.”

Flames ravaged the tower, lighting up the pre-dawn west London skyline and sending up a thick plume of black smoke. Flumes of black and grey smoke billowed into the air over London hours after the blaze was sparked.

Large pieces of debris could be seen falling from the building.

“A number of people are being treated for a range of injuries,” police said.

It has emerged that residents of Grenfell Tower voiced concerns about the building’s fire safety last year.

“It is a truly terrifying thought but the Grenfell Action Group firmly believe that only a catastrophic event will expose the ineptitude and incompetence of our landlord, the KCTMO, and bring an end to the dangerous living conditions and neglect of health and safety legislation that they inflict upon their tenants and leaseholders,” members of the Grenfell Action Group said in a blog dated November 2016.

The group has since posted a new entry on its blog, saying “all our warnings fell on deaf ears”.

“We predicted that a catastrophe like this was inevitable and just a matter of time.”

Witnesses said they heard screaming from the upper floors as the flames rose in the night.

“They were trapped. They couldn’t come downstairs, especially from the top floor … People have been burned,” a witness identified as Daniel told BBC Radio London.

Hanan Wahabi, 39, told AFP news agency she escaped with her husband and son, 16, and eight-year-old daughter but feared for her brother and his family who live on the 21st floor.

“Last time I saw him they were waving out the window, his wife and children,” she said.

Another witness, Tamara, told the BBC she also saw people trying to throw their children to safety.

“There’s people at their windows: ‘Help me, help me, help me!’ You can see the fire go into the house and into the last room that they’re in, and just engulfing their whole apartment.”

Al Jazeera’s Laurence Lee, reporting from London, said “there were serious and long-standing complaints by the residents”. 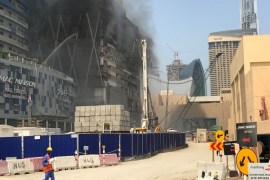 No injuries reported in fire that broke out near Dubai Mall and Burj Khalifa, the world’s tallest building. 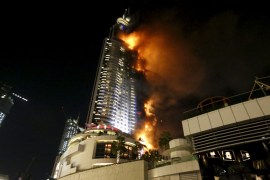 Dubai investigates cause of luxury-hotel fire

Embers smoulder from blaze which engulfed the Address Downtown before New Year’s Eve fireworks and injured at least 16.