The United Kingdom has urged Saudi Arabia, the UAE and Bahrain to ease their blockade on Qatar and find an immediate solution to the impasse through mediation.

British Foreign Secretary Boris Johnson told reporters on Monday that he was “concerned by some of the strong actions” taken by the three Gulf Arab nations and pressed them “to ease the blockade on Qatar.

“I call on all states to take immediate steps to de-escalate the situation and to find a rapid resolution through mediation,” Johnson said.

He added that he will meet with his counterparts from Saudi Arabia, Kuwait and the United Arab Emirates later this week.

Qatar’s Foreign Minister, Sheikh Mohammed bin Abdulrahman Al Thani, told Al Jazeera earlier on Monday that Qatar and the US were in touch with Kuwait, the main mediator between the members of the Gulf Cooperation Council (GCC), “to calm the situation”.

“Our top priority in Qatar is to end this unlawful blockade imposed against us,” he said from the British capital, London.

“Qatar is of the opinion that dialogue is the best answer to this crisis. However, such dialogue must be based on clear foundations, which are not yet made available.”

Saudi Arabia, the UAE, Bahrain and Egypt cut diplomatic and transport ties with Qatar a week ago, accusing Doha of backing terrorism.

The Qatari government has rejected the allegations as “baseless” and described the blockade as a “violation of international law.” 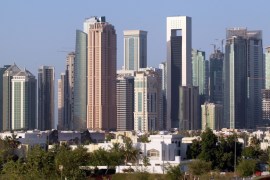