The UK government will delay the Queen’s Speech, in which it traditionally spells out its policy plans, following last week’s shock election that resulted in Prime Minister Theresa May losing a parliamentary majority, British media reported.

The speech had been due to take place on June 19 but would be put back by a few days, the BBC said on Monday.

A spokesman for May refused to confirm the date at a daily briefing, saying only that there would be a statement regarding the Queen’s Speech “in due course”.

The report comes as May is due to hold her first cabinet meeting since Thursday’s shock election, which resulted in a hung parliament.

The prime minister will try to convince legislators from her Conservative Party that she should remain as leader after a gamble on a snap election that weakened Britain’s hand just days before formal talks with the European Union about Britain’s departure from the bloc, or Brexit.

May will be discussing with cabinet members a deal for a minority government with Northern Ireland’s Democratic Unionist Party (DUP).

Brexit Minister David Davis has said that an agreement with the DUP is possible.

The Conservatives won 318 seats out of the 650 in Thursday’s vote, meaning they now require support to govern and have chosen the socially conservative and eurosceptic DUP, which has 10 seats, for that.

In a limited cabinet reshuffle, May appointed Damian Green, who is considered a liberal conservative, as the first secretary of state.

Michael Gove, a cabinet minister with whom May has clashed in the past, was named as the environment secretary.

In an effort to shore up support within her cabinet and to lay her future plans, May is set to meet her closest advisers and cabinet colleagues.

“She will be looking around the room wondering if some of these people will try to launch a challenge against her because she’s in such a weak position,” Al Jazeera’s Laurence Lee, reporting from the UK capital, London, said.

May had called the snap vote in April to strengthen her mandate before the start of Brexit negotiations, but the result backfired.

A conservative group of MPs known as the 1922 Committee, angered by the election result, are also due to meet in London on Monday.

Lee said that meeting will be a better indicator of whether May can survive in the immediate term.

On Tuesday, May is also due to meet Arlene Foster, the DUP leader, to finalise a deal to ensure support for May’s minority government on major issues.

“The big question is what exactly this coalition with the DUP will look like and what it does to May’s perception of the so-called hard Brexit,” Lee said. 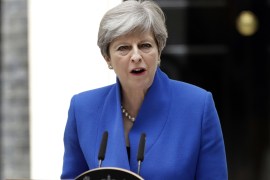 We examine whether Brexit talks are in disarray after Britain’s election throws up a hung parliament. 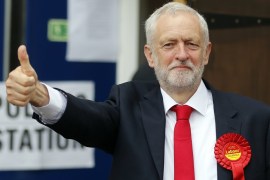 We examine how acts of terror shaped the British media narrative in the run-up to the UK election. Plus, Cuban cinema.