Qatar’s trade and economy minister has said the impact of a blockade on Doha by its Gulf Arab neighbours has been “limited” as the country was prepared for such an event with alternative supply chains.

Sheikh Ahmed bin Jassim Al Thani told Al Jazeera on Monday that Qatar had planned for such an eventuality and was able to address last Monday’s blockade “within hours”.

“We started to import food, milk and other such items from Turkey on the first day of the blockade,” he said.

“Now we are not talking about the primary need of the consumer, we are now talking about maintaining the lifestyle Qataris and those living here in Qatar hold.

“All supply chains, either by air or sea are working smoothly – it’s business as usual,” he added.

Saudi Arabia, the UAE, Bahrain and  Egypt cut diplomatic and transport ties a week ago, accusing Doha of backing “terrorism.”

The Qatari government has dismissed the allegations as “baseless” and said that it has been leading the region in attacking what it called the roots of “terrorism”, including giving young people hope through jobs, educating hundreds of thousands of Syrian refugees and funding community programmes to challenge the agendas of armed groups.

“All infrastructure projects, those linked to the 2022 World Cup or related to other infrastructure upgrades that we have planned such as the Metro, highways and others – all will be on schedule,” Sheikh Ahmed said.

“Even if we don’t import or export for the next year, we have enough materials to cover our infrastructure and private sector projects.”

Qatar’s foreign minister, speaking on a diplomatic tour of the UK and France, echoed the views of the economy minister, saying the blockade would not have “radical implications.”

“Qatar’s economy is robust. It is true it is mostly based on oil exports, but it is also based on foreign investments, diverse industries and businesses that are not dependent mainly on the markets of the countries that imposed those measures,” the foreign minister said.

“If there is some increase in certain areas of cost, it will be compensated in future. That is why our economy will not be affected.” 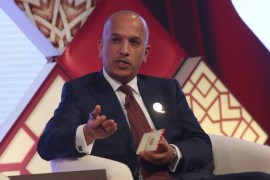