US troops have killed an Afghan civilian and his two young sons after opening fire “indiscriminately” when their convoy was hit by a roadside bomb in eastern Afghanistan, local officials and witnesses said.

The incident took place early on Monday in Ghani Khel, a district in the south of Nangarhar province, Attaullah Khogyani, a spokesman for the provincial governor, told Al Jazeera.

“As the bomb blast hit their vehicle, the US troops starting shooting,” he said, adding that they had launched an investigation into the incident.

Ziyar Gul, a brick kiln labourer, was at work along with his sons – eight-year-old Faridullah and 10-year-old Sharafat – when they came under fire, according to witnesses.

“As soon as the blast took place, the US troops started firing indiscriminately out of fear,” Azizullah Aziz, a witness, told Al Jazeera, adding that a third son who was also present had managed to escape the firing.

“He ran and called for help, but by the time he was back, his father and brothers were dead.”

Four other members of the Gul family, including Ziyar’s six-year-old son, were killed in a US raid last year, relatives said.

“Could they not see that the people they [US troops] killed were children and an unarmed man? How could they fire directly at children and kill them? Their bodies were in bits and pieces after being shot numerous times,” Neyaz Gul, brother of Ziyar Gul, told Al Jazeera.

“No one is held accountable for killing innocent people like this in Afghanistan.”

READ MORE: US and NATO troops in Afghanistan

Douglas High, a spokesman for the NATO mission in Afghanistan, confirmed that a roadside bomb had struck a convoy transporting both US and Afghan soldiers.

“We have not received any official allegations of civilian casualties,” High said in a statement, adding that the soldiers used small arms fire in self-defence.

High said in a statement on Monday that the soldiers returned fire in self-defence.

According to a UN tally, 2016 was the worst year for Afghan civilian casualties since the United Nations Assistance Mission in Afghanistan (UNAMA) began recording them in 2009.

That count found that conflict-related civilian casualties in Afghanistan rose to 11,418 in 2016, including 3,498 people killed and 7,920 wounded.

US and Afghan troops have been battling armed groups in Nangarhar province for months after the Islamic State of Iraq and the Levant (ISIL, also known as ISIS) group established a stronghold in the region, which borders Pakistan.

US military officials estimate that there are about 600 to 800 ISIL fighters in Afghanistan, mostly in Nangarhar, but also in the neighbouring Kunar province.

The increase in Washington’s military involvement in Afghanistan comes as US President Donald Trump’s administration decides whether to deploy more troops there.

Last month, several US media reported that military officials and advisers to Trump’s administration had drafted a proposal to increase the number of soldiers in Afghanistan to help in the fight against the Taliban.

The potential troop surge would range from between 3,000 to 5,000 soldiers, including Special Operations forces, unnamed officials told US media.

There are about 8,400 US troops in Afghanistan today, on top of another 5,000 from NATO allies, who mainly serve in a training and advisory capacity. US-led NATO troops have been at war in Afghanistan since 2001, after the toppling of the Taliban government. 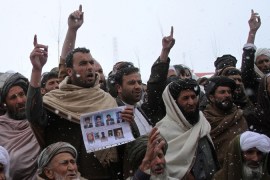 Will Afghan claims of misconduct by US special forces strangle the fraught relationship between Kabul and Washington?