The United Nations says it is not bound by Saudi Arabia’s “terror list” after the kingdom named several high-profile Qatari charities that carry out life-saving work in war-torn and impoverished countries.

“The UN is bound only by the sanctions lists put together by UN organs such as the Security Council. We’re not bound by any other lists,” Dujarric said.

“The Office for the Coordination of Humanitarian Affairs has over the years built strong partnerships with these organisations based on shared humanitarian principles, which are strictly non-political,” he added.

The Qatari government rejected allegations of supporting individuals and groups blacklisted as “terrorists” after the four countries cut ties with Doha amid a major diplomatic crisis.

“The recent joint statement issued by Saudi Arabia, Bahrain, Egypt, and the UAE regarding a ‘terror finance watchlist’ once again reinforces baseless allegations that hold no foundation in fact,” the Qatari government said.

“Our position on countering terrorism is stronger than many of the signatories of the joint statement – a fact that has been conveniently ignored by the authors.”

Mahjoob Zweiri, a professor at Qatar University, said the “terror” list was dubious because “there’s a body within Qatar’s Ministry of Social Affairs, which looks at all the charities and monitors every penny they receive and send”.

Zweiri added these charities cooperate with international aid agencies, including USAID and UK-based Oxfam, in conflict zones such as Syria and Iraq. They also assist in troubled areas such as Palestine, Yemen and South Sudan.

“By saying that those specific charities [are engaged in terrorism], they are questioning the work of the international aid agencies cooperating with them as well,” Zweiri said.

Since its establishment in 1984, Qatar Charity has sponsored 213,750 young orphans into adulthood, and has built more than 621 schools worldwide.

In 2014, it was ranked first by the UN for its relief efforts in the Syrian, Palestinian, and Somali crises. Since the start of the Syrian war more than six years ago, Qatar Charity has helped about eight million Syrians. 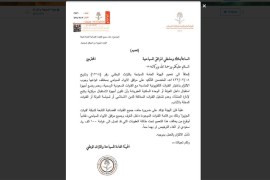 Hotels and tourist facilities in the kingdom airing Al Jazeera threatened with closure and fine of up to $26,000.