An estimated 250,000 Palestinians from the occupied West Bank, the blockaded Gaza Strip, and Arab communities inside Israel converged on East Jerusalem’s Al-Aqsa mosque complex to perform Friday prayers during the Ramadan fasting month.

Men over 40, children under 12, and women of all ages were allowed by Israeli authorities to enter East Jerusalem for the occasion without permits.

Since Friday morning, the Israeli authorities have stepped up security around the flashpoint site, deploying thousands of troops in surrounding alleyways and erecting roadblocks at the entrances of Jerusalem’s Old City.

“Due to all the security restrictions, it took me four hours to reach Jerusalem from [the West Bank city of] Nablus,” Salem Abdulhadi, 52, told Anadolu news agency.

“I usually perform Friday prayers at Al-Aqsa for Ramadan despite the stepped-up security,” he said.

Sheikh Azzam al-Khatib, the Palestinian director-general of Religious Endowments and Al-Aqsa Affairs, said about 250,000 worshipers showed up at Al-Aqsa to attend Friday prayers.

“We’re expecting about 150,000 Palestinian worshipers from the West Bank and Gaza Strip to stay for taraweeh [night-time] prayers,” he said.

Al-Khatib added the Jordan-run Religious Endowments Authority would distribute food and water to worshipers each day at sunset.

Salem Sabaana, a 40-year-old Palestinian from the West Bank city of Jenin, told said it was his first visit Al-Aqsa since his childhood.

“I am excited to finally visit and pray at Al-Aqsa again,” he said. “I’ve been waiting for this moment for 30 years.”

“Along with my wife and two daughters, I plan to stay here this evening to attend taraweeh prayers,” he added.

His 12-year-old daughter, Safaa, voiced her desire to come to Al-Aqsa each Friday of Ramadan.

“It is my first time to visit Al-Aqsa,” she said. “It is very beautiful. My dad has promised to bring us here every Friday.”

The Al-Aqsa mosque complex is sacred to both Jews and Muslims and is seen by the latter as the world’s third holiest site.

Israel occupied the West Bank and East Jerusalem – in which Al-Aqsa is located – during the 1967 Arab-Israeli War. In a move never recognised by the international community, Israel annexed the entire city in 1980, claiming it as its “eternal and undivided” capital. 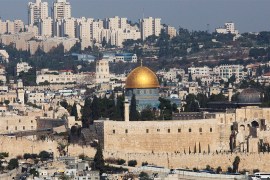 Police say site closed to Jews and other non-Muslim visitors until end of Islam’s holy month after two days of clashes. 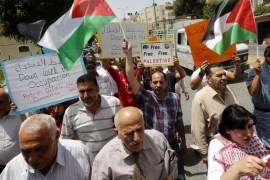