The parliament of Macedonia has endorsed a new government led by Social Democrat leader Zoran Zaev on Wednesday, in a first step towards ending the country’s two-year political crisis.

Zaev, whose SDSM party has formed a coalition with parties representing the country’s ethnic Albanians, won the support of 62 out of 120 MPs, in a vote that came nearly six months after parliamentary elections.

Forty-four voted against, and five abstained.

“I conclude that the parliament voted in the government of Macedonia,” Talat Xhaferi, the parliamentary speaker, said after the vote.

Zaev, a 42-year-old economist by training, vowed to step up economic reforms and pledged to speed up the country’s bid to join the European Union and NATO.

“The concept of one society for all is the future of Macedonia,” Zaev said Wednesday, he said.

His opponents, however, said his goals would be difficult to achieve.

During the debate leading up to the vote, which began on Tuesday, a deputy of the nationalist VMRO-DPMNE, Dimitar Stevanandzija, said Zaev made “promises that are unreal and absurd”.

Macedonia has been without a functional government since 2015 after a wiretapping scandal brought down the previous administration of Nicolas Gruevski.

Efforts to advance towards membership of the EU and NATO have stalled due to a dispute with Greece over Macedonia’s name, which it shares with a northern Greek province.

What is happening in Macedonia?

Of the 25 ministers in Zaev’s government, seven are ethnic Albanians, who make up one-third of the country’s population.

President Gjorge Ivanov earlier had refused to give the mandate to Zaev, accusing him of endangering Macedonia’s unity and sovereignty.

The crisis threatened to re-ignite inter-ethnic conflict, with ethnic Albanian parties demanding as a condition for joining any new government that Albanian be designated a second official language.

A month of protests followed across the country.

As part of the coalition deal, Xhaferi, an ethnic Albanian, was elected last month parliament speaker. That prompted protests by nationalists who stormed the parliament building and beat some politicians, including Zaev. 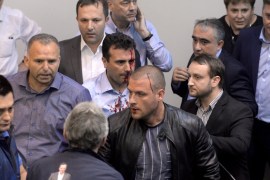 What is happening in Macedonia?

It’s not an ethnic conflict and it’s not Russia’s fault. 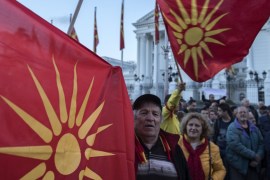 The move escalates a long-running political crisis which has paralysed Macedonia and once again raised ethnic tensions. 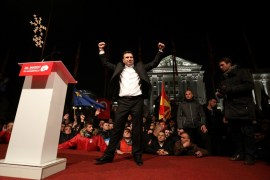