The Egyptian military has flown multiple raids and destroyed 15 4X4 vehicles crossing from Libya, deploying fighter jets and helicopter gunships in an operation that spanned 48 hours.

The military didn’t say who was driving the vehicles or give details of any casualties, news agencies reported.

The only information provided on Monday came on the Egyptian military’s Facebook page, which claimed the trucks were carrying weapons and other contraband.

The air force operation came as security forces killed eight fighters identified as members of the Muslim Brotherhood in an attack in the country’s south, according to the interior ministry.

President Abdel Fattah el-Sisi has launched the toughest crackdown on armed groups in Egypt’s modern history since toppling former President Mohamed Morsi of the Brotherhood in 2013.

Those killed included Helmi Masri Mohareb, a commander from Libya who transported fighters across Egypt‘s southern border to join training camps, the interior ministry said in a statement.

The fighters planned “to form groups to carry out a series of hostile operations in the coming period by sending elements from these groups to join training camps abroad”, it said.

Egypt has outlawed the Muslim Brotherhood and designated it a “terrorist” group. The organisation maintains its activities are peaceful and had no immediate comment.

Morsi was elected as Egypt’s first civilian president in 2012, but the army overthrew him a year later following mass protests against his divisive rule. Since then, an extensive crackdown on the group has left it in disarray after security forces violently quashed their protests. 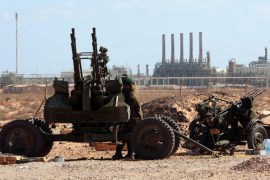