North Korea’s state media says it has detained another US citizen for suspicion of acts against the state.

If confirmed, it would make him the fourth American to be held by the isolated country amid heightened diplomatic tensions.

Kim Hak-song, reportedly detained on Saturday, worked for the Pyongyang University of Science and Technology, the KCNA news agency reported on Sunday.

“A relevant institution of the DPRK detained American citizen Kim Hak-song on May 6 under a law of the DPRK on suspicion of his hostile acts against it,” KCNA said, using the acronym for the Democratic People’s Republic of Korea.

No further details were given about the circumstances related to the reported arrest and a spokesman for the Pyongyang University of Science and Technology was not immediately available for comment.

A US state department official on Sunday issued a terse comment about the American’s reported detention.

“We are aware of reports that a US citizen was detained in North Korea,” a statement said, adding no additional comment was being offered “due to privacy considerations”.

Earlier this week, North Korea confirmed the late April detention of Kim Sang-duk, a professor associated with the same university, for “committing criminal acts of hostility aimed to overturn the DPRK”, KCNA said.

The detentions come as tensions remain high between Washington and Pyongyang.

Officials in Washington and Seoul have not commented on the allegations.

Tensions have surged in the Asia Pacific region in recent weeks in the wake of a series of North Korean missile tests, and rhetoric from US President Donald Trump’s administration on the country’s nuclear weapons programme.

The US also deployed a naval strike group to the Korean Peninsula, angering Pyongyang, and US officials have said that “all options are on the table”.

At least two other US citizens are currently being held in North Korea after being sentenced to long prison terms.

Last year, Otto Warmbier, then a 21-year-old University of Virginia student, was sentenced to 15 years of hard labour in prison after he confessed to trying to steal a propaganda banner. Kim Dong-chul is serving a 10-year sentence for espionage. 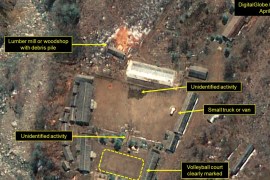