An agreement has been reached to evacuate fighters from the hardline group formerly known as Jabhat al-Nusra from Yarmouk in the southern suburbs of Damascus to rebel-held Idlib province in the northwest of Syria.

“Activists in the area told us that green buses arrived in Yarmouk and left carrying dozens of Nusra Front fighters along with their families,” said Al Jazeera’s Hashem Ahelbarra, reporting from Gaziantep along the Turkey-Syria border.

“The operation will continue for some days, and then the Syrian army is expected to take over the part of the camp that was under the control of al-Nusra.”

Most of the nearly 50 fighters were wounded, according to the Beirut-based Hezbollah-affiliated television channel al-Manar.

Jabhat al-Nusra was the official branch of al-Qaeda in Syria until a year ago when it broke its formal allegiance and renamed itself. It has since joined a number of hardline groups under the new name Hay’et Tahrir al-Sham (commonly referred to as Tahrir al-Sham).

Jabhat al-Nusra and later Tahrir al-Sham have at times fought alongside other rebels, including those that operate under the banner of the Free Syrian Army, against the government and at times have clashed with them.

Yarmouk, in the southern suburbs of Damascus, is the location of a large Palestinian refugee camp. Parts of the area are held by the government, parts by rebels including Tahrir al-Sham, and parts by Islamic State of Iraq and the Levant (ISIL, also known as ISIS).

The earlier deal involved evacuating civilians from the rebel-besieged Shia-Muslim towns of Kefraya and al-Fouaa in Idlib province in return for the departure of civilians and rebel fighters from the government-besieged areas of Zabadani and Madaya, near Damascus.

Completed late last month, that agreement was the largest and most complex so far in a series of evacuation deals for besieged areas that have grown more common over the past year of Syria’s bloody six-year war.

While Assad’s government in Damascus has praised such deals as a way to reduce bloodshed, the rebels have condemned them as a means to impose demographic change by forcing large numbers of civilians to leave pro-opposition areas.

The United Nations, which has not been party to the agreements, has also voiced concern that the evacuations amount to forced displacement.

Elsewhere on Sunday, the Syrian army seized control of the village of al-Zalakiyat north of Hama amid heavy bombardment, a war monitor reported, despite a deal brokered by Russia, Syria’s main foreign backer, to reduce fighting.

Violence has raged in the countryside north of Hama for more than a month, since rebels there launched an assault against government forces that was quickly reversed and has now turned into an army push into areas the opposition captured last year.

Under an agreement that took effect at midnight on Friday, fighting was intended to subside over six months in four “de-escalation zones“, where violence between the army and rebels has been most intense.

Fighting also took place on Sunday in the Qaboun district of Damascus, said the Syrian Observatory For Human Rights, a UK-based group that monitors the war via a network of contacts around the country.

The besieged rebel-held enclave of Qaboun is not included in the four de-escalation zones and has been under increasingly heavy bombardment in recent months.

Negotiations were under way on Sunday to evacuate rebels and their families from Qaboun and the adjacent district of Barzeh, an anonymous Syrian military source told AFP news agency.

If the talks are successful, this would be the first time rebels will have been evacuated from Syria’s capital since the country’s conflict broke out six years ago.

The “safe zones” deal was agreed to during ceasefire talks last week in Astana, Kazakhstan, between the Syrian government’s backers Russia and Iran, and the main rebel sponsor Turkey.

Syria’s government said it supported the proposal but added it would continue to fight what it called “terrorist” groups around the country.

Opposition groups rejected the deal saying “special zones” threatened Syria’s territorial integrity, that any role for Iran was unacceptable, and that Russia had been unable to get Assad to respect previous ceasefire agreements.

“The opposition is accusing the Syrian government of using siege and starvation to force people out of their own areas,” Al Jazeera’s Ahelbarra said.

“They also say the government has managed, over the last few months, to forcibly displace thousands of people from Hama, Homs, Aleppo and from Damascus. They’re concerned if this continues, the government could further move towards Idlib and do the same thing.” 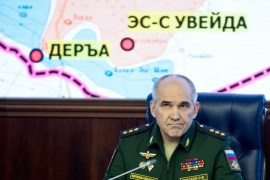 Russia says it will be a month before ‘de-escalation zones’ are fully established, as Syrian opposition voices concern. 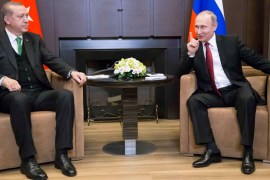