As sea levels rise, so the salt water is spreading further inland leading to saline intrusion and coastal erosion in Vietnam.

The Mekong River Delta is amongst the most vulnerable regions in South Vietnam. It is home to more than 17 million people and produces around half of the country’s rice harvest.

The Vietnamese government has stated that 40 percent of the delta could be submerged if sea levels rise by one meter in decades to come, as levels are currently rising at the rate of 3mm per year.

Climate change is believed to be causing the rise of sea levels, which in turn leads to an increase in salt content of water to land that is used for rice paddies, coconut groves and other crops.

As the crops fail to grow, so the livelihoods of millions of farmers and fishermen are threatened.

Residents in the low-lying delta have already been affected by more frequent typhoons and heavier floods, with some already seeing their livelihoods impacted.

As the weather is expected to become more extreme, so it could potentially force hundreds of thousands of people to flee from their homes. 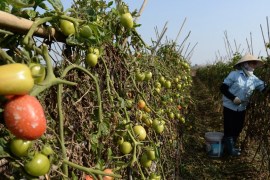