Eight Latin American nations, including Mexico, Argentina and Brazil, have collectively denounced Venezuela’s “excessive use of force” against civilian protesters after the death toll from anti-government unrest in the country rose to 36.

The group of nations, also including Colombia, Costa Rica, Guatemala, Honduras and Paraguay, condemned the increase in violence in the oil-producing country and urged its government to respect the human rights of its citizens.

“We condemn the excessive use of force by Venezuelan authorities against civilians who are protesting government measures that affect democratic stability and cause the loss of human life,” the countries said, according to a statement from the Mexican government.

Al Jazeera’s Latin America editor Lucia Newman, reporting from the capital, Caracas, said protesters were keeping up the pressure on the government.

“The last 24 hours have seen some of the worst street confrontations in more than a month of non-stop anti-government protests, especially in Caracas,” Newman said.

“Government opponents are increasing the pressure, at least on the streets, since President Nicolas Maduro responded to their demands for early presidential elections, with a decree to rewrite the constitution,” she added.

READ MORE: The end of autocracy in Venezuela?

Costa Rica said late on Thursday that it had recalled its highest-level diplomat in Venezuela, charge d’affaires Ana Patricia Villalobos, for consultations.

Venezuelans, already on tenterhooks after the unrest that has killed protesters, government supporters, bystanders and security officials, were shaken on Thursday after rumours about the health of jailed opposition leader Leopoldo Lopez.

Maduro’s leftist government, facing a wave of major opposition protests since last month, later issued a short “proof of life” video in which Lopez said he was fine.

Protesters are demanding immediate presidential elections and blame Maduro for an economic crisis that has led to shortages of food, medicine and basic goods in the South American nation.

Maduro accuses the opposition of attempting a coup, and has responded with an initiative to rewrite the constitution.

More than 400 people have been injured and over 1,000 arrested since the unrest began in early April. 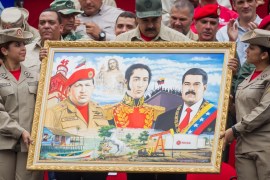 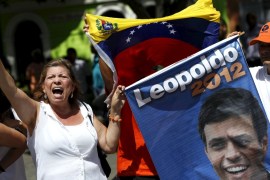 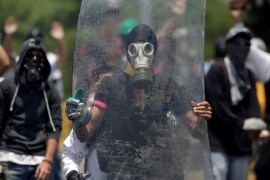