Russia, Iran and Turkey have signed a deal calling for the setup of so-called de-escalation zones in war-torn Syria during talks in Kazakhstan’s capital, Astana.

The signing ceremony on Thursday was briefly interrrupted as some members of the Syrian armed opposition’s delegation stormed out in protest against Iran’s participation in the deal.

“We saw several members of the opposition delegation stand up furiously condemning what was going on,” Al Jazeera’s Jamal Elshayyal, reporting from Astana, said.

“They shouted that Iran should not be a signatory to this. In fact, they went as far to saying that Iran is a criminal entity that shouldn’t be here and they stormed out.”

The latest round of talks in Astana is sponsored by opposition supporter Turkey and Syrian government backers Russia and Iran.

Elshayyal said that neither the Syrian government, nor the opposition – which on Wednesday suspended its participation in the talks protesting against ongoing air raids – had signed the agreement.

“It is very clear that this is regional powers who have decided that they are going to bulldoze their way forward, and decide what’s best for Syria,” he said.

Speaking to Al Jazeera in Astana, Staffan de Mistura, the United Nations special envoy to Syria, said the agreement was an important step as the war had been going for six years and a successful deal could “help the atmosphere of the Geneva [peace] talks”.

“[‘De-escalation’] was a carefully chosen word in order to reduce to the bare minimum the use of weapons; for instance, airplanes, use of heavy weapons,” said de Mistura.

“[But] even when we say a ‘reduction of violence’ it doesn’t mean total ceasefire because we know in conflicts like this, there will be spoilers. So the expectation is substantial reduction – hopefully to the minimum – of the level of use of certain types of weapons.”

Whether UN peacekeeping forces would be involved was unknown at this point, de Mistura said, although he did not rule it out.

He also defended the agreement against criticism that the guarantors were also major perpetrators of the violence by saying that they have the means to reduce their actions.

“So I would put some trust in the fact that the very three countries who signed do have an involvement and therefore can also have a dis-involvement,” he said.

Elshayyal said the deal, which is likely to come into effect in around a month, would allow for “unhindered humanitarian access” to the de-escalation areas.

Yet, there was no detail on whether the zones involved restricted use of heavy weaponry or complete de-militirisation; or whether there will be a peacekeeping force and how the deal will be policed.

Elshayyal said the locations of the “de-escalation zones” are likely to be: Idlib, and the Turkmen mountains, parts of Homs governorate, and areas on the outskirts of Damascus – including Ghouta – and in Deraa in the south.

“Over the past two days, the participants in the Astana talks reviewed the implementation of the ceasefire agreement and the cessation of hostilities,” Kairat Abdrakhmanov, Kazakhstan’s foreign minister, said of a frail truce brokered by Moscow and Ankara in December.

“As a result the guarantor countries agreed to sign a memorandum on the creation of de-escalation zones in Syria.”

Alexander Lavrentyev, the head of the Russian delegation in Astana, said that Syrian government fighter jets are not expected to fly over the “de-escalation” zones for six months.

Russian military aircraft will also refrain from flying over such
areas, Lavrentyev said, unless there are what he described as
attempts to destabilise the situation.

Osama Abu Zaid, a member of the Syrian opposition delegation, told Al Jazeera why they had rejected the deal.

“This is the key and core problem in the agreement.”

Abu Zaid also criticised the exclusion in the deal of key areas experiencing violence, such as Hama, and said that Russia had also failed to deliver on its past commitments.

READ MORE: Turkey and Russia push for safe-zones in Syria

These negotiations are viewed as complementary to broader United Nations-brokered talks in Geneva on a political settlement, but neither have yielded real progress so far.

Abdrakhmanov said that next round of talks in Astana would be held in mid-July. 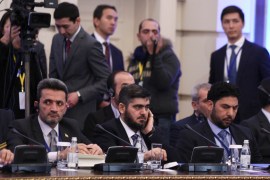 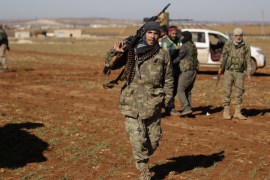