Security forces in Venezuela used water cannons and tear gas to disperse tens of thousands of opposition protesters heading towards the foreign ministry as the Organization of American States held another meeting on the crisis.

Two months of protests against President Nicolas Maduro’s socialist government have convulsed the South American OPEC nation with at least 59 people killed in the unrest.

But as happens near-daily with rallies trying to reach government offices, National Guard soldiers blocked their way and drove them back with volleys of gas and blasts of water.

“It’s always the same. We set off peacefully, and they attack us. We have to respond, we’re human beings,” said law student Brian Suarez, 20, holding a homemade wooden shield depicting a shooting target with the faces of Maduro and other officials.

“Here are the faces of the people who have led us to ruin,” he added, as women handed food, shoes, and other supplies to the young men battling security forces.

With international pressure mounting on Maduro, foreign ministers from the 34-nation OAS bloc met in Washington, DC, on Wednesday to debate the situation in Venezuela.

When the meeting was announced last month, Venezuela said it was withdrawing from the OAS in protest.

However, Brazil, Argentina, and other countries are urging action, perhaps the establishment of a “contact group”, to act as a trusted third party mediator for both sides and guide political dialogue to end the crisis.

“Many countries are saying it is the very definition of the OAS to get involved in something like this. At the moment nothing is improving, and it is making life for ordinary people in Venezuela much worse,” Fisher said.

Maduro, 54, accuses opponents of seeking his violent overthrow with US support, similar to a short-lived 2002 coup against his popular predecessor Hugo Chavez.

He has called for the creation of a super-body, or constituent assembly, with powers to rewrite the constitution, in voting set for the end of July.

“The constituent vote will bring us peace,” said food ministry worker Freimar Ruiz, 29, at a government rally mainly attended by public sector workers to mark the beginning of a period in which people can sign up to be candidates.

“They say we’re paid to be here, but that’s a lie because if not, I wouldn’t be so short of money,” she joked.

It has also made Maduro deeply unpopular, with many people within the ruling “Chavista” movement questioning the constituent assembly given that Chavez himself had the constitution re-written in 1999.

Venezuela’s opposition is refusing to participate, saying the vote set for July is a sham with biased rules to ensure the body is filled with Maduro supporters. They fear a new assembly could then skew the rules for governors’ elections in December of this year and the presidential vote slated for late 2018.

Polls show the government would lose any conventional vote.

As well as deaths, the unrest in Venezuela has led to hundreds of injuries and, according to local rights group Penal Forum, nearly 3,000 people arrested of whom 1,351 remain held. 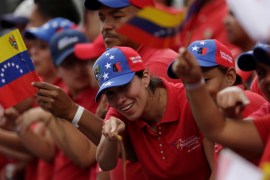 Venezuela: Why I support Nicolas Maduro

“We are in the middle of a class war … We need to fight. The protests are blackmail by those on the right.” 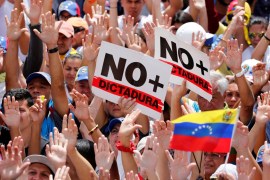