Turkey’s military says 13 soldiers have died in a helicopter crash near the border with Iraq.

A military statement said the AS532 Cougar helicopter crashed on Wednesday shortly after taking off from a base in the region of Senoba in Sirnak province.

“As a result of the painful accident, our hero comrades in the helicopter fell as martyrs,” the statement said.

It said initial information indicated that the helicopter hit a high-voltage transmission line.

The governor’s office for the province of Sirnak said the helicopter crashed near the town of Uludere, three minutes after taking off.

The helicopter crashed at 8:55pm (17:55 GMT), the military said, adding that an investigation was under way.

Turkey’s chief of staff, General Hulusi Akar, travelled to the region to carry out an inspection, the state-run Anadolu news agency reported.

The crash occurred as Turkish troops are engaged in operations against Kurdish fighters in a mountainous region of Sirnak province.

In March, seven people, including four Russians, were killed when a privately owned helicopter crashed in Istanbul after hitting a television tower. 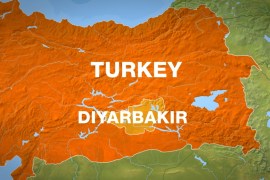 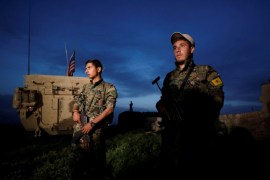 Officials criticise Trump’s decision to arm YPG units in battle for Raqqa against ISIL as US tries to reassure Ankara.