A massive truck bomb blast has ripped through the heart of Kabul’s diplomatic district, killing at least 80 people and wounding hundreds in a powerful explosion described by officials as “one of the biggest” to have hit the capital of Afghanistan.

A tanker truck believed to be carrying either water or human waste exploded on Wednesday near Zanbaq Square in Kabul’s 10th district, close to shops and restaurants as well as government offices and foreign embassies.

Police and health officials confirmed to Al Jazeera that at least 80 people were killed and more than 300 wounded in the attack.

Reporting from Kabul, Al Jazeera’s Qais Azimy cited sources as saying that the death toll could be as high as 100, with more than 500 wounded.

“This is one of the biggest attacks in Afghanistan that I have ever seen,” he said. “It’s a very sad and very bloody day for the people of Kabul.”

Aziz Navin, an IT engineer with the Afghan TOLOnews outlet, was one of the first victims to be named.

Mohammed Nazi, a driver with the BBC, was also killed while four journalists from the British public broadcaster were being treated in hospital.

“[Nazir] was driving journalist colleagues to the office,” the BBC said in a statement posted to Twitter. “He was in his late thirties and leaves a young family.”

An Afghan security guard at the German embassy also died in the attack.

The victims appear mainly to have been Afghan civilians, and there were no immediate reports of casualties among foreign embassy staff.

“The area is heavily guarded, and there is usually traffic jam, just because of security-controlled points in the area,” Mushtaq Rahim, an independent analyst and security commentator, told Al Jazeera from Kabul.

“And that was one of the main reasons that we had so many civilian casualties. because of the congestion that happens in that area.”

Video shot at the scene showed burning debris, blasted walls and buildings and destroyed cars, many with dead or wounded people inside.

Al Jazeera’s Qais Azimy said the location of the attack was very significant, as it hit one of the Afghan capital’s busiest and most secure parts.

“Kabul has been very quiet for the past week, but police have confirmed to us that this was one of the biggest blasts Kabul has ever seen,” he said.

The incident raised many security questions in Kabul, Azimy said, noting that many were wondering how “a truck full of explosives could manage to get to that highly secure” part of the Afghan capital.

“Heavily-loaded vehicles are checked thoroughly, and usually they are not allowed to pass through these areas without prior clearance from the security forces,” he said.

The Islamic State of Iraq and the Levant (ISIL, also known as ISIS) group has claimed responsibility for several recent bombings in the Afghan capital, including a powerful blast targeting an armoured NATO convoy that killed at least eight people and wounded 28 on May 3.

Sigmar Gabriel, Germany’s foreign minister, said that an Afghan security guard was killed and several employees of the German embassy wounded in the blast.

Sushma Swaraj, India’s minister of external affairs, tweeted that all of the staff at the Indian embassy “were safe in the massive Kabul blast”.

French officials said the country’s embassy in Kabul was damaged in the attack, but there were no signs at this stage of any victims.

Ambulances rushed to the scene of the blast, while a huge plume of smoke could be seen rising from the area.

Houses and shops hundreds of metres away from the blast site were damaged, with windows and doors blown off their hinges.

“The explosion was so loud that it shattered all my windows, did not hear something this big before,” Fatima Faizi, a Kabul resident, told Al Jazeera. 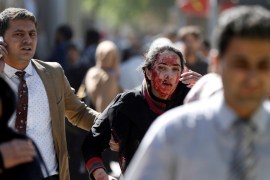 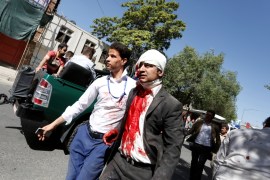 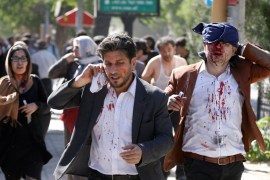 People at site of huge blast that killed at least 80 people describe scenes of confusion and large-scale destruction. 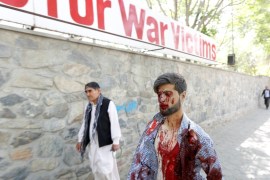