Packing heavy rain and winds, the storm made landfall between Cox’s Bazar and the port city of Chittagong early on Tuesday morning.

Police said a woman and a man were crushed under trees felled by strong winds in Cox’s Bazar.

Another woman died of panic, officials said, adding that several thousand houses were damaged in the area, most of them mud-built structures.

Community leaders for some 200,000 Rohingya refugees, many of whom live in flimsy makeshift camps having fled persecution in neighbouring Myanmar, said damage to the camps was extensive and there had been no attempt to evacuate them.

“In some places, almost every shanty homemade of tin, bamboo and plastics has been flattened,” said Abdul Salam, a Rohingya community leader, adding that around 20,000 houses had been damaged and some residents injured.

Away from the camps, authorities had evacuated more than 449,000 people to some 400 cyclone shelters as the storm approached. They had initially planned to make one million people leave their villages.

Officials in Chittagong reported winds gusting up to 135 kilometres per hour, and said low-lying coastal areas were flooded by a storm surge with two-metre high waves.

Authorities called in all fishing vessels and all flights were suspended to and from airports in Chittagong and Cox’s Bazar.

Cox’s Bazar has for years been home to hundreds of thousands of Rohingya, a stateless minority.

Mohammad Anam, a Rohingya who fled to Bangladesh last year after an outbreak of violence in Myanmar, said there had been no attempt to evacuate the minority community, many of whom are undocumented.

“Nobody came to alert or evacuate us. When the storm came we rushed to local schools to take shelter,” he told the AFP news agency.

He said some Rohingya had found refuge in local schools and mosques, but thousands had been left without food or shelter.

Al Jazeera’s Tanvir Chowdhury, reporting from Dhaka, said the Rohingya were the most vulnerable as “they are unable to go to other parts of the country or nearby towns, nor do they have relatives they can take shelter with”.

“So it’s totally up to the government and aid agencies to help them take shelter somewhere, because they are in open air right now and the weather is still quite bad. It is also the month of Ramadan. So many people are fasting.”

Many Bangladeshis in coastal areas were in the same situation, he added.

A UN official working with Rohingya refugees in Bangladesh told the Reuters news agency that the damage in the camps could not be assessed while the storm was raging.

“Heavily pregnant women have been evacuated but most people in areas like Balukhali and Kutupalong makeshift settlements have stayed,” said the official, who declined to be identified.

“The winds are strong and people there live in flimsy structures, so we’re worried.”

In Myanmar, about 300 houses were damaged in Rakhine State but the extent was unclear, the government said.

The cyclone was expected to weaken in Bangladesh by late morning as it moved inland towards India, where authorities have warned of heavy rain in the northeastern states of Tripura, Mizoram, Manipur, Nagaland and Arunachal Pradesh.

It formed after monsoon rains triggered floods and landslides in Sri Lanka, off India’s southern tip, which have killed at least 180 people in recent days, authorities said.

In the eastern Indian state of Bihar, 24 people have been killed in recent days, either by lightning or in collapsed dwellings.

Bangladesh is routinely hit by bad storms between April and December that cause deaths and widespread property damage.

In May last year, Cyclone Roanu hit the southern coast of Bangladesh leaving 20 people dead and forcing half a million to flee their homes. 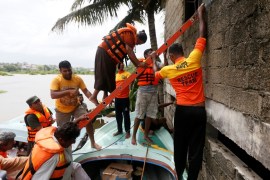 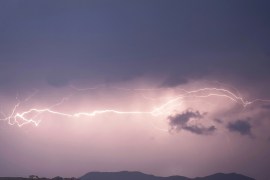 Severe storms, known as Kalboishakis, bring lightning, flooding and even tornadoes to parts of India and Bangladesh.