Thousands of Palestinians have rallied in the West Bank city of Ramallah in solidarity with hunger-striking Palestinian prisoners held by Israel.

Protesters gathered in Nelson Mandela Square on Wednesday, chanting “Freedom, freedom” and waving Palestinian flags and posters of Marwan Barghouti, leader of the hunger strike, currently in its 17th day.

More than 1,500 prisoners launched the action on April 17 to press for better conditions, including family visits, better medical care and an end to solitary confinement and administrative detention.

Those taking part are ingesting only water and salt.

Supporters of the prisoners say 50 more will join in their hunger strike from Thursday, among them prominent leaders such as Ahmed Saadat, of the Popular Front for the Liberation of Palestine.

Speakers at the rally in Ramallah called for a new campaign of civil disobedience against Israeli occupation.

Addressing the crowd, Barghouti’s wife, Fadwa, delivered a speech on her husband’s behalf, saying: “This battle (the hunger strike) is part of our battle against the occupation and for independence and dignity.

Barghouti, 57, is serving five life sentences over his role in the second Intifada.

In a statement released by the Palestine Liberation Organization on Wednesday, he wrote: “Israel cannot silence us, nor isolate us, nor break us”.

He added: “This hunger strike aims to confront the ongoing and escalating unjust Israeli occupation policies against prisoners and their loved ones. We stress our determination to undertake this struggle whatever the cost.”

Qadoura Fares, head of a Palestinian prisoners rights group, called for a “popular intifada in support of the intifada of the prisoners”.

Some 6,500 Palestinians are currently held by Israel for a range of offences and alleged crimes.

About 500 are being held under Israel’s system of administrative detention, which allows for imprisonment without charge.

Al Jazeera’s Harry Fawcett, reporting from Ramallah, said Israel has imposed additional sanctions on the protesting prisoners, including cutting off their access to lawyers, a move that impelled a legal challenge at the Israeli Supreme Court.

Lawyers for the prisoners “have come to some agreement with the lawyers for the other side and they are expecting to gain access to at least some of those prisoners from tomorrow, Thursday,” he said.

The prisoners’ protest has drawn widespread support, with schools, banks and businesses closing in the West Bank last Thursday in solidarity. A group of students in the UK also launched a week-long hunger strike in a show of support.

Family visits are at the heart of the hunger strike.

Relatives have received no news about their loved ones and live in a state of “permanent anxiety”, Mahmud al-Ziadeh, whose son Majd has been in prison for 15 years, told AFP news agency.

Hind Afena has not seen her sons Ahmed and Salah since they were jailed six months ago and one year ago respectively.

The International Committee of the Red Cross (ICRC) issued a statement on Wednesday, urging Israeli authorities to stop what it called the “systematic suspension” of family visits for the hunger strikers.

“Family contact must be improved, not further restricted,” said Jacques de Maio, head of the ICRC delegation in Israel and the occupied territories. “The families are paying the price for this situation.”

For Palestinians, the prisons have become a stark symbol of Israel’s occupation.

Palestinian prisoners have mounted repeated hunger strikes, but rarely on such a scale.

Some 850,000 Palestinians have been imprisoned since the start of Israel’s occupation 50 years ago, Palestinian leaders say. 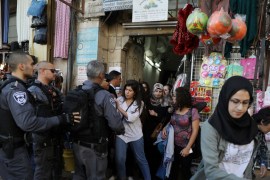 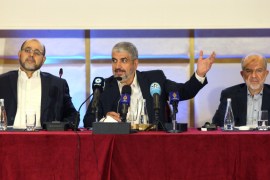