At least eight people were killed in a large explosion in Afghanistan’s capital, Kabul, officials said, with reports saying the target was a NATO convoy.

The attacker blew up his explosive-laden vehicle next to the convoy near a National Defence Security (NDS) checkpoint on Shash Darak road in the central Macroyan area early on Wednesday, military officials said.

At least eight Afghan civilians were killed and 22 others wounded, including three US service members, officials said.

“The injured were transferred to two hospitals in the area; the Wazir Akbar Khan Hospital and the Emergency Hospital,” Wahid Majrouh, a health ministry spokesman, told Al Jazeera.

“Some of the wounded are in a critical condition,” Majrouh added.

“There are dead bodies lying on the road here,,” Abdul Haq, a witness, told Al Jazeera.

“Police are clearing the area and the city is on high alert,” he added.

The blast occurred in an area not far from the US embassy and a compound used by the NATO-led Resolute Support mission.

The Islamic State of Iraq and the Levant (ISIL, also known as ISIS) group claimed responsibility for the attack in a statement carried by its Amaq media arm.

An affiliate of the group has gathered strength in recent years, and is now at war with both the US-backed government and the Taliban armed group.

The blast came several days after the Taliban announced their so-called “spring offensive”, in which they vowed to target foreign troops.

Kabul last month endorsed US General John Nicholson’s call for thousands of additional coalition troops in Afghanistan to fend off the group during the spring offensive.

Extra troops were needed to end the stalemate in the war, Nicholson, the top US commander in Afghanistan, told the US Congress.

Separately, the Pentagon said it would deploy some 300 US Marines this spring to Helmand province alone.

The Marines will assist a NATO-led mission to train Afghan forces, in the latest sign that foreign forces are increasingly being drawn back into the worsening conflict.

A recent UN report showed that Kabul province had the highest number of civilian casualties in the first quarter of the year due to attacks in the capital.

The body had called on all groups to “take every measure possible to prevent unnecessary and unacceptable harm to Afghan civilians”. 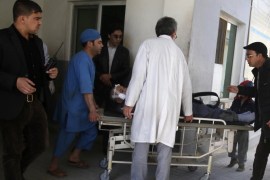 Explosions and gunfire ring out in different parts of Kabul, killing at least 16 in attacks claimed by the Taliban. 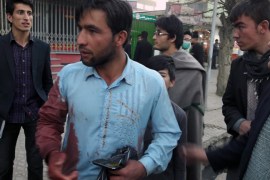 Magnetic “sticky bomb” planted under a military vehicle detonates near education ministry in the Afghan capital.