This year’s rainy season has arrived with a vengeance across Sri Lanka. At least 146 people have died in the floods and mudslides that have ensued, according to official figures.

The monsoon officially arrived along the island nation’s south coast around May 15, in keeping with the normal onset of the summer rains.

However, pre-monsoon showers have been producing spells of heavy downpours for much of this month. The weekend saw a brief respite from the heaviest rain, but any relief is likely to be temporary.

The worst of the rain has now moved out into the open waters in the middle of the Bay of Bengal, where a large clutch of thunderstorms has developed into a tropical cyclone.

This system, which is currently known as Tropical Cyclone 02B, is forecast to move north. It is likely to cause flooding across parts of Myanmar and Bangladesh.

The cyclone will then weaken as it tracks north on its way towards Chittagong where it is expected to make landfall, or close to the city, around 06:00 GMT on Tuesday.

The winds will not be a problem, but the heavy rain and possible storm surge is likely to cause widespread flooding. The strongest winds and highest surge will be along the coastal fringes of Myanmar on Monday.

Thereafter, the flooding rains and big seas will squeeze into the low-lying Gangetic Plains with the potential to cause widespread disruption.

Meanwhile, the trailing stream of showers will gather once more over Sri Lanka as the southwest monsoon feeds another pulse of wet weather into the western side of the country.

It will also mark the onset of the summer rains along India’s Kerala coast right on schedule. 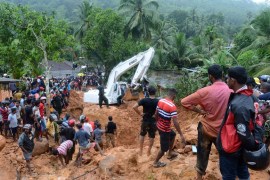 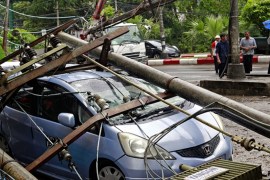 The year’s first cyclone of the northern hemisphere forms in the Bay of Bengal and dissipates over the west of Myanmar. 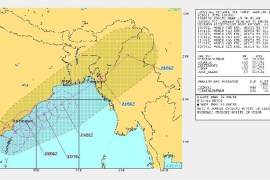 Half a million flee as Cyclone Roanu hits Bangladesh

At least 23 killed and 500,000 relocated to shelters as cyclone makes landfall triggering flooding and landslides.