Sao Paulo – Brazil’s President Michel Temer is barely hanging on to power, accused of corruption and obstruction of justice following leaked secret recordings that appear to show him authorising bribes.

Temer has denied any wrongdoing and has so far refused to resign. Yet, analysts believe that his exit from the presidency is more than likely – though how and when still remain unclear.

The scandal comes just over a year since Temer manoeuvred to oust his predecessor, Dilma Rousseff, in a controversial impeachment process in which the former president was eventually removed after being accused of manipulating the federal budget.

Brazil is also suffering its worst recession on record. The economy shrank by nearly eight percent in the last two years and unemployment stands at a record 14 percent.

David Fleischer, a professor of political science at the University of Brasilia, argued that Temer knows that his days are numbered, but is staying in office to try to negotiate a pardon.

“He doesn’t have any ability to govern and so the politicians are seeking a way out for him to be removed gracefully and have an indirect election in Congress to elect a new president,” Fleischer said.

Temer’s troubles began when Brazilian newspaper O Globo reported that he was secretly taped authorising hush money to Eduardo Cunha, the disgraced former speaker of the house who is serving a 15-year jail sentence for corruption.

The recording was made during an unofficial meeting between Temer and billionaire Joesley Batista as part of a plea bargain deal following a corruption investigation at JBS, the world’s largest meatpacking company, of which Batista is the chief executive.

That investigation was part of sprawling probe, known as “Car Wash”, which centres on political kickbacks in exchange for firms winning contracts at state-run enterprises. It has led to more than 90 convictions of businessmen and politicians and prompted the investigation of dozens of sitting Congress members and a third of Temer’s cabinet.

In the same plea bargain, it is alleged that Temer himself accepted millions of dollars in bribes and an investigation by Brazil’s Supreme Court was approved.

O Globo later published an editorial calling for Temer to resign, while the scandal sparked protests and prompted several impeachment filings against him.

Temer’s approval ratings stood at less than 10 per cent before the recording scandal broke and dropped to as low as five percent since.

Critics say Temer used his position as an un-elected president to push through measures that would never pass by popular vote.

During his time in office, Temer has won praise from investors for enacting a series of unpopular austerity measures, including a 20-year cap on public spending.

He also promised to reform Brazil’s labour and pension codes, measures he defended as bitter but necessary to pull the country out of recession.

But now, in the wake of the latest scandal, Temer faces the wrath of the markets he once wooed.

“Michel Temer has no way out, but Brazil does. I defend his immediate exit,” said Adeodato Netto, chief strategist at Eleven Financial, a Sao Paulo based financial research group.

Netto said he was confident that amid Brazil’s financial troubles, Congress would choose a market-friendly president to carry on Temer’s reforms and provide fiscal responsibility, a trend he expects to continue when direct presidential elections are held in 2018.

Analysts believe that the quickest and most likely scenario for Temer’s removal is for Brazil’s electoral court to annul the results of the 2014 presidential election. The court is due to meet on June 6.

Impeachment, on the other hand, would be a long process and could only open by the speaker of the house. Rodrigo Maia, the current speaker, is a Temer ally, and according to Brazilian media reports he will not open any of the nine proceedings filed so far against the president.

In any case, if Temer left office, Brazil’s Congress would have to pick a new president in an indirect election, according to the constitution.

Brazil’s opposition, however, has rallied over a proposed constitutional amendment that would see direct elections so that the next president could be chosen by the people.

Direct elections are favoured by 85 percent of Brazilians, according to opinion polls, but are seen as highly unlikely before 2018 as they would require majority approval in the Congress.

Seventy percent of Brazilians are also against Temer’s proposed pension reform that will see them working for longer.

“We can’t have an election done by a Congress that has only acted against the will of the people and that will elect someone that would continue what is being done [reforms] with no popular agreement,” said Marilice Claro da Silva, a Sao Paulo teacher who travelled to Brasilia to take part in an anti-Temer protest organised last week by trade unions and social movements.

The protest ended in violence with black smoke billowing over the capital as groups of youths reportedly set fire to a ministry building. Protest organisers said the rioters were not part of their movement.

According to media reports, police responded by firing live rounds as well as tear gas, pepper spray and stun grenades.

Temer issued a presidential decree to deploy troops to protect government buildings and quell the violence. The army was recalled the next day.

The movement that forced the beginning of the end of Brazil’s military dictatorship in 1984 brought millions of people from all political stripes to the streets.

Yet, anti-Temer demonstrations calling for direct elections have so far been mostly in the tens of thousands and have failed to unite many protesters outside of traditional left-leaning groups.

In contrast, millions of Brazilians protested in 2013 in what began as a response to police repression of a bus fare hike protest that spiralled into demands for better public services, criticisms of World Cup spending and anti-corruption.

Since then, especially after the 2014 election, the country has become increasingly polarised.

For Pablo Ortellado, a professor of public policy management at the University of Sao Paulo, the constant revelations and scandals over the past few years may have left many feeling protest fatigue – even momentarily.

“With the accusations and the discoveries that we’ve seen over the past few years, the people have every reason to distrust any established political party,” Ortellado said.

“At the moment, no one is really mobilising because there is a certain political stalemate. But this could change,” he said. 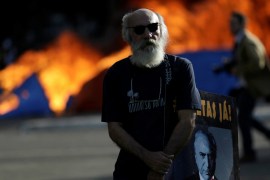 1,500 soldiers deployed in Brasilia are removed after accusations President Michel Temer only trying to cling to power.