As Indian medical and emergency teams arrive in Sri Lanka to aid rescue and recovery efforts after devastating floods and landslides, the torrential rains of the past several days are easing.

A large island in the Indian Ocean immediately south of India, Sri Lanka consists of extensive lowland regions around the coast and a large mountainous interior, where the highest peaks rise to more than 2,400 metres.

Situated between six degrees and 10 degrees north, Sri Lanka has a typical tropical climate, which is somewhat modified by the seasonal wind reversal of the southwest monsoon.

Most of the country has an abundant or moderate rainfall which is well distributed throughout the year. The southwest coast and mountain slopes are the wettest regions, with the greatest rainfall during the months of April to June and October to November.

The flooding rains of the past few days were heaviest in the southwest of the country and mainly due to the onset of the southwest monsoon, which typically arrives in Sri Lanka in late May.

One city impacted by flood waters and landslides is Galle, in the country’s southwest. In just 24 hours, the city received 163 mm of rain, a quarter of the May monthly average of 718 mm.

In Ratnapura, which is situated in the south-central region of the country, residents received 304mm in just 24 hours, more than half their May monthly average of 520mm.

In Colombo, the country’s capital situated on the west coast, the rains have been considerably less, with 58mm in 48 hours, against a monthly average of 371mm.

Whilst the rain over the past several days has been persistent and heavy across much of the southern half of Sri Lanka, it is that, along with an already saturated ground and high river levels, that has led to this widespread flooding.

Sri Lanka has been seeing the effects of the pre-monsoon showers for almost the entire month of May.

As the rainfall pours down the high peaks from the mountainous interior, it eventually fills the rivers with nowhere else to go, flooding the land at lower levels and bringing down the mud and rocks along with it.

The forecast for the next few days is for less rain than this past week.

Yet, as the southwest monsoon continues to progress northwards into India, the coming months through July are likely to bring enhanced amounts of rainfall, where, once again, the danger of flooding and landslides remains high. 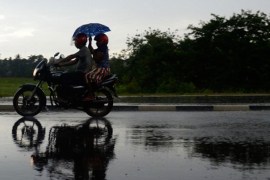 A developing tropical cyclone has brought torrential rains over southern parts of the Bay of Bengal. 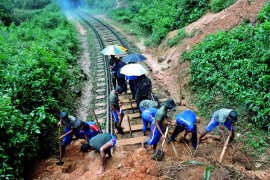 Torrential rain and mudslides blamed for at least 39 deaths and displacement of one million people in past two weeks. 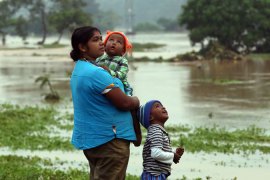 The start of the monsoon season has been marked by exceptionally heavy rain across the Indian Ocean nation.