Saudi Arabia’s High Judicial Court has announced that, based on confirmed sightings of Ramadan’s new moon crescent, the first day of Ramadan 1438 fasting will be Saturday, May 27.

As per tradition, the sighting of the new moon marks the beginning of the Muslim lunar month of Ramadan.

Turkey and Muslim communities in America, Europe and Australia previously announced they would observe Ramadan fasting from May 27, based on astronomic calculations.

In Muslim-majority countries, offices are required by law to reduce working hours, and many restaurants are closed during daylight hours in Ramadan.

“Ramadan Mubarak” and “Ramadan Kareem” are common greetings exchanged in this occasion, wishing the recipient a blessed and generous Ramadan.

#Auspol we extend our prayerful and kindest thoughts to the #Muslim Community for #Ramadan #RamadanMubarak pic.twitter.com/G7L1kCskla

Muslim lunar months last between 29 and 30 days, and depending on sighting of the moon on the 29th night of each month. If the moon is not visible, the month will last 30 days.

Astronomic predictions indicate that the new moon crescent should be visible either with the naked eye, or with a telescope from around the world on Friday evening.

Moon sighters in the UAE posted a photo showing the new moon crescent during the day on Friday.

Last year in May, member states of the Organisation of Islamic Cooperation, at the International Hijri Calendar Unity Congress held in Istanbul, voted in favour of adopting a single unified lunar calendar.

However, local sighting continues to be the default policy in each country.

Ramadan lasts either 29 or 30 days, depending on sighting of the moon on the 29th night of Ramadan, on Saturday June 24.

At the end of Ramadan, Muslims celebrate breaking their fast with the three-day festival of Eid al-Fitr, but holidays differ by country.

This year, Saudi Arabia announced holidays from the 25th of Ramadan until the 7th of Shawal, the lunar month after Ramadan.

As per astronomic calculations, Turkey and Muslim communities in the US and Europe expect the first day of Eid al-Fitr on Sunday, June 25. 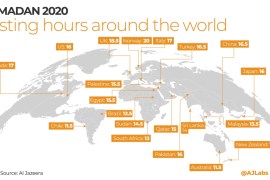 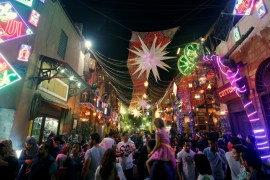 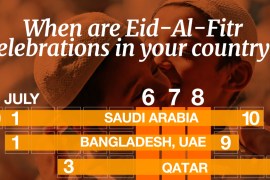