Failure of a former Pakistan president and co-chairman of the ruling PPP party in Sindh province to address the deteriorating conditions in the poverty-stricken Tharparkar district shows how the poor and deprived are not on politicians’ agenda, local residents and activists say.

Asif Ali Zardari, who was Pakistan’s president from 2008-2013, visited Tharparkar on Thursday with Sindh’s chief minister to review progress of the ongoing Thar coal power projects and oversee construction of a dam in Gorano village.

While lack of accessible medical care and health officials is touted as one of the major reasons, poverty, illiteracy, lack of clean drinking water and teenage pregnancies also play a major role in the high child mortality rate.

Failure of either official to address the worsening situation shows the ruling party’s neglect and lack of concern for the district, said Partab Shivani, an educationist and social activist in Tharparkar.

“These politicians visit the coal projects frequently but despite the increasing death and suicide rates, and the deteriorating health condition of the residents, there is no intention on the Pakistan Peoples Party’s (PPP) part to improve things,” Shivani told Al Jazeera.

“It doesn’t look like Tharparkar and its people are on the PPP’s agenda. If you don’t provide basic facilities for residents and help them out, they will die.”

At least eight infants, including two-month old Jugesh, have died at the Mithi Civil Hospital Mithi, the sole medical facility serving the district’s 1.5 million people, in the last three days.

Patients present at the hospital complained of being forced to drink highly contaminated water of the wells which, according to them, was the main reason behind the current deaths.

Despite repeated attempts, the district health officer of Tharparkar, the civil surgeon of Mithi Civil Hospital and the PPP spokesperson could not be reached by Al Jazeera for a comment.

Local journalists who had gathered to question the PPP co-chairman and the Sindh chief minister on Thursday said the visitors toured a “model village” but refused to meet locals, including PPP supporters, or visit the affected areas.

“Villagers affected by the construction of the new dam have been protesting for over 200 days. The politicians came to oversee work on the dam but failed to meet those who are being affected by its construction,” said Shivani.

Tharparkar is in a need of an additional 332 doctors; yet earlier this year, the Sindh government dismissed 25 doctors, including five female doctors, according to a report in Pakistan’s Dawn newspaper.

“We have not been given medicines and other facilities in government hospitals,” one of the parents at the hospital complained to reporters.

“The doctors here are insisting we get our kids admitted into private clinics.”

The Dawn report said at least 20 doctors working at civil hospitals in the district have set up private clinics in Tharparkar.

“I sold my wife’s jewellery, I sold my shop, my business, my motorcycle. I sold it all off. We came down to zero. But nothing could save our children,” said Chandar.

“The government is blind and deaf. It doesn’t care about the poor. It gets into power through our votes but doesn’t actually do anything for us. It doesn’t even give kerosene oil for the poor man to pour and kill himself and his family.”

Earlier this month, Ahsan Iqbal, Pakistan’s federal minister for planning, development and reform, was quoted in the media as saying that the desert region of Tharparkar was home to some of the world’s largest coal reserves and thus could not be left unexploited.

Whatever the plans of the PPP and the federal government for Tharparkar, they seem far removed from reality to local residents, who say their modest demands remain unmet by both the provincial and national assemblies, said Shivani.

“The politicians and stakeholders need to look beyond the photo opportunities they come to Tharparkar for,” said Shivani, the educationist.

“The poor have to be back on the agenda. Right now, it’s mostly the locals and the nongovernmental organisations working. The health situation needs to be looked into and doctors need to be paid. The focus needs to be on the common man of the district.” 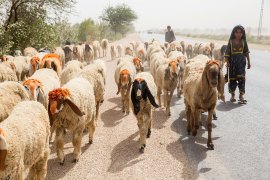 Tharparkar: The history and culture amid catastrophe

Away from the misery, the region boasts a rich cultural and religious heritage. 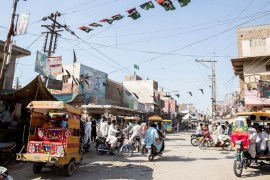 Can the Bhuttos hold on to their heartland of Larkana?

Locals lament the lack of development in a stronghold of the PPP party of former Prime Minister Benazir Bhutto.