At least 106 civilians, including 42 children, have been killed in a series of air strikes by the US-led coalition on an ISIL-held town in eastern Syria, according to a monitoring group.

“There were two rounds of strikes: one at Thursday night and the second after midnight, targeting buildings housing families of [ISIL] fighters,” Rami Abdel Rahman, the SOHR’s head, told DPA news agency.

Abdel Rahman said most of those killed were Moroccan and Syrian nationals who had fled to Al Mayadeen from ISIL’s de-facto capital, Raqqa, in northeastern Syria.

The first round of air strikes reportedly killed 35 civilians.

The SOHR tracks developments in Syria’s conflicts via a network of contacts on the ground.

Colonel Ryan Dillon, spokesperson for the 68-member coalition against ISIL, told Al Jazeera that any loss of civilian life in the battle against ISIL, or the Islamic State of Iraq and the Levant group, is a “tragedy”.

“The coalition goes through very significant and deliberate processes to make sure that we can mitigate the human suffering and the human casualties as we continue our fight to defeat [ISIL],” he said.

“The faster we can defeat [ISIL], the quicker human suffering can stop.”

Al Jazeera’s Patty Culhane, reporting from Washington DC, said the latest air strikes may relate to the so-called December Directive – a memo sent by Barack Obama before the end of his presidency changing the command structure enabling commanders on the ground to bypass the Pentagon and order air strikes, while also easing the restrictions on when they could fire.

“They used to have to have ‘near certainty’ that no civilians would be killed,” our correspondent said. “It’s a much looser rule now.

“And that’s why you’re seeing many human-rights groups coming out and saying that those changes need to go back to how they were before the December Directive.”

The latest developments come even as the UN urges all countries bombing ISIL in Syria to better distinguish between civilian and military targets.

Zeid Ra’ad Al Hussein, the UN human rights chief, said on Friday that civilians are increasingly paying the price of escalating attacks against ISIL, also known as ISIS, in Syria.

“The same civilians who are suffering indiscriminate shelling and summary executions by ISIL, are also falling victim to the escalating air strikes, particularly in the northeastern governorates” of Raqqa and Deir Az Zor,” Al Hussein said in a statement from Geneva.

“Unfortunately, scant attention is being paid by the outside world to the appalling predicament of the civilians trapped in these areas.”

Al Hussein cited a May 14 strike that reportedly killed 23 farm workers in a rural area of Raqqa province and an air strike the following day that is said to have killed at least 59 civilians and wounded dozens in ISIL-controlled al-Bukamal (also known as Abu Kamal), another town in Deir Az Zor.

Al Hussein also said he was concerned about retaliatory measures taken by ISIL against civilians suspected of facilitating the air strikes and reports that civilians were being prevented from leaving ISIL-controlled areas.

The day after the al-Bukamal incident, ISIL fighters reportedly cut the throats of eight men at the site of the attack, accusing them of providing coordinates for the air strikes.

On Thursday, a Pentagon investigation concluded that at least 105 civilians died in an air raid on an ISIL weapons cache in Iraq’s Mosul in March.

Dillion, the coalition spokesperson, did not comment specifically on Thursday’s Al Mayadeen incident, but told Al Jazeera that allegations of civilian casualties are taken seriously and investigated thoroughly.

He also said ISIL sometimes use civilians as human shields.

The US-led coalition began bombing ISIL targets in Iraq in the summer of 2014, and expanded their operations to Syria on September 23 of that year.

This week, the SOHR reported the highest monthly civilian death toll for the coalition’s operations in Syria.

Between April 23 and May 23 of this year, coalition strikes killed a total of 225 civilians in Syria, including dozens of children.

Prior to the new revelation, the US military had said coalition air strikes in Iraq and Syria had “unintentionally” killed a total of 352 civilians since 2014. 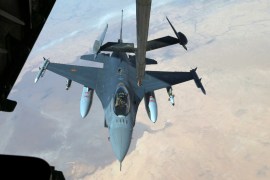 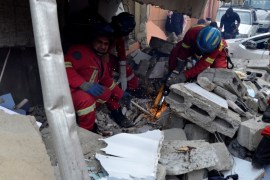 US says Mosul strike in March killed over 100 civilians