Donald Trump has hit out at NATO, saying its members must start “paying their fair share” of defence costs.

Speaking to alliance leaders on Thursday in Brussels for the first time, the US president said massive amounts of money are still owed.

He urged allies attending the meeting in Belgium to meet their financial obligations and spend more for collective NATO defence.

“Twenty-three of the 28 member nations are still not paying what they should be paying and what they’re supposed to be paying for their defence,” Trump said at NATO’s new headquarters in Brussels.

In accordance with his America First policy, Trump said “is not fair to the people and taxpayers of the United States and many of these nations owe massive amounts of money from the last years”.

NATO’s current spending target of two percent of GDP on defence is not due to be met until 2024.

Germany spends 1.2 percent on defence but argues that its spending on development aid also contributes to international security.

Trump also said the Manchester suicide bombing was a “barbaric and vicious attack” and told NATO leaders: “We must be tough, we must be strong and we must be vigilant. The NATO of the future must include a great focus on terrorism and immigration as well as threats from Russia on our borders”.

Trump’s mention of Russia was noteworthy as his campaign team has been accused of close ties with Russian interests.

NATO is expected to formally join a US-led coalition against the Islamic State of Iraq and the Levant (ISIL) group in Syria and Iraq, according to an announcement by Jens Stoltenberg, NATO’s secretary-general.

The decision is largely symbolic because all 28 NATO member states are already individually part of the coalition, with some only taking part in support roles.

It comes in response to pressure from Trump, who has urged NATO members to do more in the fight against ISIL.

Al Jazeera’s Paul Brennan, reporting from London on Thursday, said NATO leaders are not necessarily comfortable with this, “but nevertheless when the most powerful man in the Western world wants you to do something, you have to come to some accommodation with him”.

One other topic on the agenda will be a potential increase in the number of troops in Afghanistan.

NATO began considering a troop increase earlier this month after it received a request from army chiefs for more soldiers to help in the fight against the Taliban, Stoltenberg said.

The prospect of a troop surge might have drawn considerable support in Brussels and Washington, but the move has elicited strong opposition in Kabul.

“They are thinking of sending soldiers…They [the soldiers] will not do anything,” Sher Mohammad Karimi, a retired general in the Afghan National Army, told Al Jazeera. “If they are advisers, then it’s OK.”

They agreed to set up a joint EU-US action plan on trade relations, but Tusk said that differences remain.

“We agreed on many areas, first and foremost on counterterrorism,” Tusk said after the one-hour meeting.

“But some issues remain open, like climate and trade.”

Pulling the US out of the Paris climate deal is also a topic expected to be raised during the NATO summit by European leaders.

On another security note, Theresa May, British prime minister, said she would tell Trump at the NATO summit that private intelligence shared between their two countries, which included forensic photographs from the bomb site published by the New York Times newspaper, should not be leaked.

UK police stopped sharing information about the Manchester suicide bombing with the US on Thursday after leaks to American media that police said had risked compromising their investigations. 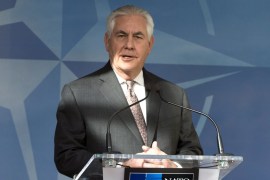 Will NATO members cave in to US demands?

The US secretary of state issues a warning to NATO allies to increase their defence spending. 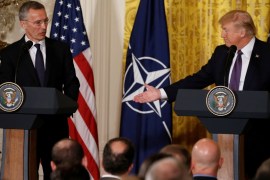 After months of criticism, US president says the global military alliance is no longer ‘obsolete’. 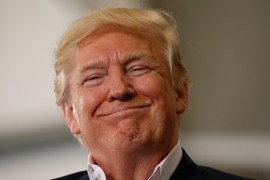 The US military, veterans, a border wall, and space exploration all stand to gain from 10-year budget – but plenty to lose out as well.