The Philippine army has launched air raids against ISIL-linked fighters who are hiding in a southern city they attacked earlier this week.

The siege of Marawi has sent thousands of people fleeing and prompting President Rodrigo Duterte to declare martial law in Mindanao region.

The “surgical air strikes” were aimed to flush out up to 40 fighters believed to be hiding in Marawi, Lieutenant-Colonel Jo-ar Herrera, a military spokesperson, said on Thursday.

A majority of the 200,000 residents have fled Marawi, about 800km south of the capital, Manila, but Herrera said those who remained had been warned to get out of the areas where there was bombing and fighting.

“We have identified targets that we need to clear,” he said. “We need to neutralise the remnants of the local terrorist groups.”

But the Philippine military has also suffered some setbacks, with local news media reporting that between six to eight soldiers died on Thursday alone.

That is in addition to the five soldiers and two police officers killed when the fighting started on Tuesday.

At least nine civilians were also reported killed on Wednesday.

The violence erupted on Tuesday after the army raided the hideout of Isnilon Hapilon, a commander of the Abu Sayyaf group, which has pledged allegiance to ISIL, or the Islamic State of Iraq and the Levant group.

Abu Sayyaf called for reinforcements from an allied group, the Maute, and dozens of fighters managed to enter Marawi and sweep through its streets.

The fighters reportedly burned a Catholic church, the city jail, and two schools, as well as occupied the main streets and two bridges leading to Marawi.

Religious leaders have accused the fighters of taking a Catholic priest and his worshippers hostage and using them as human shields.

On Wednesday the military said they had killed at least 13 fighters.

Duterte submitted to Congress on Thursday the proclamation of martial law for review as required by the constitution.

The Philippine House of Representatives and the Senate were scheduled to convene on Monday to assess the declaration.

Majul Gandamra, the mayor of Marawi, said many establishments were closed, making it difficult for those who are still in the municipality to purchase supplies.

“It’s getting difficult for people to get their basic needs, like water and food,” Gandamra told a Manila radio station.

“Our top priority is to give food, water and temporary shelter to residents.

“We are looking for an evacuation centre where there is no presence of the ISIL-related militants.”

Soldiers, supported by tanks, moved through streets and houses as they scoured three villages in the area where the gunmen were reported to be moving around.

Checkpoints were established at entry and exit points of Marawi, while helicopters hovered over the city and more soldiers arrived in trucks to secure the municipality.

The military has placed units in different parts of Mindanao under high alert, including the city of Davao, Duterte’s home town, where local authorities fear the fighters could attempt to stage retaliatory attacks. 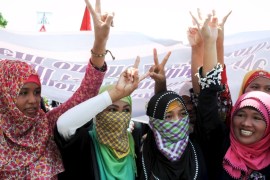 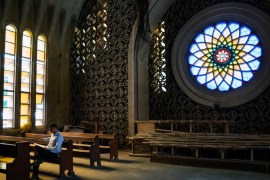 Philippines: Sins of the Father

101 East investigates sexual misconduct inside the most powerful institution in the Philippines – the Catholic Church.