Update – May 24: Since this article was published on May 23, Martyn Hakan Hett has been confirmed killed in the attack. His brother Dan, who had launched a social media campaign to find his missing sibling, tweeted: “They found my brother last night. We are heartbroken”.

Manchester, England – Tens of thousands of people in Manchester have rallied in a show of unity after a suicide bombing at a music concert left 22 people dead and dozens wounded.

An improvised explosive device went off late on Monday as thousands of fans streamed out of Manchester Arena at the end of an Ariana Grande performance.

Salman Abedi, 22, was identified by British police as the person who carried out the bombing.

On Tuesday, crowds gathered at Albert Square in Manchester’s city centre to pay tribute to those who were killed in the attack: Children, teenagers and parents who had come to collect them.

For some of those at the scene, the wounds of the attack were still fresh as uncertainty lingered over the fate of friends still unaccounted for.

Sairah Yassir-Deane has not heard from a school friend Martyn Hakan Hett – who had recently reconnected with her on social media – following the bombing.

“He’s got a good heart and always speaks about unity,” Yassir-Deane told Al Jazeera about Hett who was known to be at the concert.

“(Hett) is full of life and someone who gives everybody a reason to smile.”

The comments, which evoked the Nazi euphemism for the extermination of the Jewish people, drew widespread condemnation in the UK as well as calls for her to be sacked.

Hopkins deleted the tweet but later said she stood by her comments.

There was no sign of such controversies at the vigil where the mood was one of solemn defiance and unity, reflecting Manchester’s diverse demographic.

Crowd listened in near silence to those on stage, giving the occasional rounds of applause and chants of “Manchester, Manchester”.

“We are not scared of anyone,” Chris, who was taking part in the vigil, said. “There are always bad eggs. But for every bad one, there are millions of good ones.”

This is classic Manchester - responding with solidarity, love and industriousness. The attacker wanted to hurt us and we are hurting. But more than that, he wanted to divide us.

Tom Skinner, another Manchester local, said those responsible would not succeed in dividing the city.

“People have opened up their homes, given free taxi rides and queued up en masse to give blood,” he said.

“This is classic Manchester – responding with solidarity, love and industriousness. The attacker wanted to hurt us and we are hurting. But more than that, he wanted to divide us.”

Following the bombing, hundreds of people took to Facebook and Twitter to help out those affected. In addition to food and lifts to their destination, locals opened up their homes to those who needed a place.

A minicab company also offered free rides to safe locations to all of those affected.

After learning about the attack, Naveed Arshad, owner of Street Cars Manchester, committed 35 drivers to the relief effort.

Those caught up in the attack were taken to safe places by the derivers, even to their homes in cities as far away as Chester, which is 65km from Manchester.

“We tried our best, our phones went crazy, we just wanted to help as many of those who were stuck and didn’t know what what to do,” said Arshad.

“There were a lot of children there and they were disorientated trying to find their parents. At the same time, we had parents calling the office trying to find out where their kids were.”

Speaking shortly after the vigil, Skinner said the city’s residents could have “filled Manchester’s biggest square three times over”.

“It’s not going to happen. They won’t win,” he said, refering to the Islamic State of Iraq and the Levant (ISIL) group which claimed responsiblity for the attack. 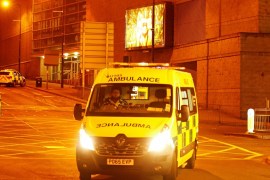 Prime minister announces change in the threat level from severe to critical, saying further attacks may be imminent. 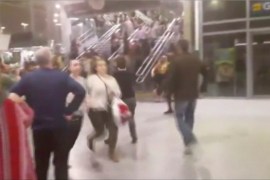 Concert-goers say they ran frantically after hearing an explosion at an Ariana Grande show which killed 22 people.