Cecile Kyenge, a black, Italian member of the European parliament and ex-minister for integration, has welcomed a Milan court’s decision ordering a white supremacist MEP pay her 50,000 euro ($56,000) for making repeated slurs against her.

Kyenge, Italy’s first black minister, tweeted that the judges’ decision on Thursday showed that “racism is a crime, not just a political opinion”.

“Racial hatred can never be an instrument of political struggle,” she wrote in another message posted to the social media platform.

In a 2013 radio interview, Mario Borghezio, a member of the xenophobic Northern League, made racist remarks about Kyenge’s inclusion in the government of then-Prime Minister Enrico Letta.

“This is a bonga bonga government, they want to change birthright citizenship laws and Kyenge wants to impose her tribal traditions from the Congo,” he told Radio 24.

Borghezio also said Kyenge – a qualified ophthalmologist – “took away a job from an Italian doctor”.

He also said, among other things, that “Africans are different. They belong to an ethnicity much different from ours. They haven’t produced great genes”.

Borghezio, whose Facebook page shows him sat with a smiling Marine Le Pen, a far-right politician who recently lost France’s presidential election, once said he agreed with parts of Anders Breivik’s manifesto. He was briefly suspended by his Northern League party over those remarks.

In violence that shocked Norway on July 22, 2011, Breivik set off a bomb in Oslo’s government district and then carried out the massacre at the annual summer camp of the left-wing Labor Party’s youth organisation on Utoya, killing at least 77 people, most of them adolescents.

Nisha Agarwal, a lawyer and the commissioner of the New York City mayor’s office of immigrant affairs, tweeted her support for Kyenge.

“[Kyenge] is such a dynamic int’l leader and advocate for migrants, among many others – this is justice long due,” she said. 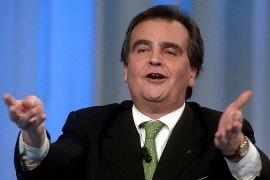