At least 95 Syrian opposition fighters and civilians have been killed during infighting in a rebel-held district in the suburbs of Damascus, according to a monitor.

In the third day of clashes, the infighting between Jaish al-Islam group against al-Rahman Corps and the al-Qaeda-linked Levant Liberation Committee (Hayat Tahrir al-Sham) has killed at least 95 people in Eastern Ghouta, the UK-based Syrian Observatory for Human Rights said on Monday.

At least 87 fighters, 32 of them from Jaish al-Islam group, and eight civilians were killed in the clashes.

Speaking on condition of anonymity, an official from Ghouta Media Centre told Al Jazeera the fighting intensified and continued on Monday.

Activists have said the reasons behind the fighting between rebel groups include different beliefs and long-term goals.

In addition to that, activists believe Jaish al-Islam wants to eject all former al-Nusra Front fighters from Eastern Ghouta.

“One of the main reasons behind these deadly clashes is the differences these rebel groups have,” a Syrian journalist in Eastern Ghouta, who spoke on condition of anonymity, told Al Jazeera.

“They have different beliefs and goals. But the infighting is affecting us because we already live under a siege. We have the government air strikes from above, a siege and fighting on the ground.

“The Syrian government is abusing this distraction and continues to target us with air strikes. Just a while ago a child was killed in a government air strike in Hamouriya [Eastern Ghouta].

“Residents are scared another Aleppo scenario will happen to Ghouta. We are scared of being forced to leave our homes.”

The Ghouta Media Centre official said there was a protest in Erbin, one of Ghouta’s districts, where civilians called for an end to the ongoing fighting.

“The protesters were shot at with live ammunition. We know that Jaish al-Islam were the group targeting civilians in the protest,” he said.

The Syrian Observatory said at least 3,000 people attended the protest, adding that 12 people were injured in the gunfire.

Eastern Ghouta, which has been partially besieged by the Syrian government since 2013, has an estimated population of 400,000, according to a report by a Netherlands-based Siege Watch team.

The area is made up of 22 communities and has seen Russian and Syrian air attacks on civilian markets, schools, and hospitals in many of them.

Mohammed Alloush, a leading figure in Jaish al-Islam, was the chief negotiator for the High Negotiations Committee, the main Syrian opposition group, at previous UN-brokered peace talks in Geneva.

At least 400,000 civilians have been killed since 2011, when the Syrian conflict began as a largely unarmed uprising against the government, according to the UN. 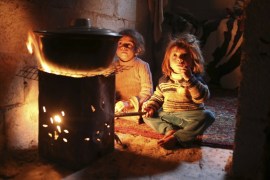