politicians in Greece have approved more pension cuts and tax hikes sought by international lenders to unlock another bailout, as angry demonstrators protested outside parliament against the new round of austerity.

The measures, which entail $5.4bn in cuts to be implemented in 2019 and 2020, were backed late on Thursday by all 153 members of parliament in Prime Minister Alexis Tsipras’ ruling coalition after a fiery debate.

All opposition MPs present in the 300-seat chamber voted against the unpopular package, which caused tens of thousands of anti-austerity protesters to take to the streets on Wednesday.

The leftist-led government hopes that legislating the multi-bill, four days before eurozone finance ministers meet in Brussels, will convince its lenders to release an $8.3bn (7.5bn euro) bailout tranche before looming debt repayments in July.

“Let the people decide with their vote who can lead the country out of the crisis and how,” he said in his speech to parliament, renewing his call for early election.

For his part, Tsipras dismissed Mitsotakis’ criticism, calling him a “false prophet”, and said it was now up to the creditors to make good on their promises.

“We deserve and we expect from Monday’s Eurogroup a decision regulating debt relief which will correspond to the sacrifices of the Greek people,” he said.

As politicians traded barbs, about 12,000 people protested outside the parliament in the capital, Athens, for a second consecutive day.

A small group of hooded protesters broke away from the rally and hurled petrol bombs and firecrackers at police guarding parliament. Police responded with tear gas dispersing the crowd temporarily.

Greece has seen its economy shrink by 25 percent since it was first forced to seek external financial aid in return for spending cutbacks in 2010. One in four Greeks is without a job, while thousands of young people have moved abroad to seek better economic opportunities.

The government, lagging in opinion polls, hopes to convince lenders of its reforms progress and to implement a restructuring to reduce its mountain of debt, hoping that this will allow Greece to be included in the European Central Bank’s asset-buying programme and return to bond markets in the coming months.

To sweeten the pill domestically, Tsipras has promised to offset the new measures with tax relief also legislated on Thursday. It will be implemented only if Greece meets its fiscal targets.

Lenders have agreed in principle to debt restructuring but not on details.

Greece is seeking a clear eurozone pledge later this month on measures to ease repayment on its huge public debt, which represented 179 percent of annual output at the end of last year.

The question has served as a point of contention for months between the German government and the International Monetary Fund (IMF), which does not want to participate in the bailout programme unless Greece’s debt burden is brought down to manageable levels.

In his calls for substantial debt relief, Tsipras faces resistance from Germany, where additional concessions are unpopular with an electorate called to a general election in September. 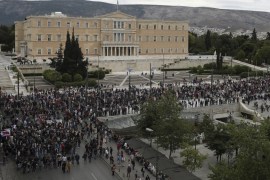 Almost 18,000 people take to the streets of Athens and Thessaloniki against new round of cuts in pension and tax break. 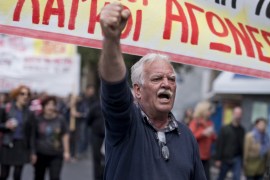