The number of immigrants arrested by US authorities has soared in the first months of Donald Trump’s administration, rising by nearly 40 percent, according to new official figures.

Trump has emboldened immigration agents in a crackdown on people suspected of being in the country without documents.

The numbers released on Wednesday by Thomas Homan, acting director of Immigration and Customs Enforcement (ICE), are seen as a snapshot of how the new president is following through on his campaign promises to make immigration enforcement a top priority.

Overall, 41,300 people were arrested for deportation between January 22 and April 29, a 38 percent increase from a comparable period last year.

That increase is a result of recent guidance given by Secretary of Homeland Security, John Kelly, to implement Trump’s executive orders on interior immigration enforcement and border security signed on January 25, just days after the Republican president took office.

‘Going after the wrong people’

Silvia Avelar-Flores, a 31-year-old mother of three from Utah, was picked up by immigration agents enforcing an old deportation order last month while she was shopping with her eight-year-old daughter in a Salt Lake City suburb.

She was released and given three months to plan her return to Mexico, a country she left as a young girl. Avelar-Flores plans to take her youngest daughter, aged two, with her and leave her 10-year-old-son and eight-year-old daughter with her husband, who has permanent US residency.

“I don’t think it’s fair,” Alves-Flores said in an interview with the Associated Press news agency. “I understand that they want to fix everything, you know, but they are going after the wrong people. Trump said he was just going for the criminals, and that’s not happening.”

Other examples highlighted by advocates include an Indian taxi driver in southern California recently arrested during a routine check-in with immigration authorities and a Mexican man facing deportation after nearly two decades in the US.

Jose Luis Sanchez-Ronquillo, who was living in Michigan, is being held in a Louisiana detention facility while lawyers try to block his deportation.

READ MORE: In the colonias of Texas, living on the edge

ICE’s Homan said the increase in arrests stems from stepped up immigration enforcement, adding that morale has improved among agents under Trump because they are “allowed to do their job”.

“Their job is to enforce the law, and that is exactly what they’re doing,” he said.

Even so, deportations were down from late January to late April compared with a year ago despite the new president’s stepped-up immigration enforcement pledge.

The increase in arrests of people without criminal convictions has generated outrage across the US from Trump opponents who believe otherwise law-abiding families are being rounded up.

The report was made public as the Trump administration seeks to promote its accomplishments despite a growing scandal over the firing of the FBI director and the sharing of intelligence with Russian officials.

The president “puts this out to distract from the real affairs of our country”, Angelica Salas, executive director of the Coalition for Humane Immigrant Rights in Los Angeles, told AP. “It is unfortunate that he basically is using the pain and destroying our families as a way by which to give red meat to his base.”

Immigration arrests doubled in the Miami and Dallas metro areas. They rose by five percent in and around Los Angeles and dropped slightly in the San Francisco area.

While arrests of immigrants rose, the number of deportations fell 12 percent during the period, ICE’s Homan said.

He attributed the drop to a decline in arrests on the US-Mexico border where immigrants are usually sent home quickly and a lengthy backlog in US immigration courts that issue deportation orders.

A section of one of the president’s executive orders, which aimed to cut off federal funding to so-called “sanctuary cities”, has been blocked by a federal judge in California. 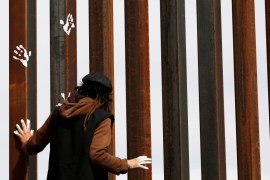 How Trump’s immigration policies could cost the economy

Deporting millions of undocumented workers will be a huge blow to the US economy and have a negative impact on growth. 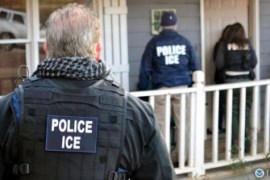 Undocumented immigrants in the US brace for impact of new Department of Homeland Security guidelines. 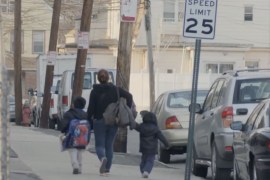 A growing number of school districts are refusing to cooperate with immigration officials.