Supporters of a jailed Christian sect leader on Wednesday attacked the prison holding him in the Democratic Republic of Congo’s (DRC) capital, Kinshasa, freeing him and about 50 other inmates, according to officials.

Ne Muanda Nsemi – a self-styled prophet and leader of the Bundu dia Kongo movement – was arrested in March after a series of deadly clashes between his supporters and police.

Witnesses told the Reuters news agency that gunfire was heard coming from near Makala prison in Kinshasa at around 4am local time (03:00 GMT), and that they saw prisoners wearing blue shirts with yellow collars in the streets.

Soldiers were also stopping young men for questioning near Nsemi’s house in the Kinshasa district of Ngaliema and arrested some of them.

Justice Minister Alexis Thambwe told a local radio station that, aside from Nsemi, the prison’s most prominent prisoners had not managed to escape.

Nsemi has a strong following in southwestern DRC and wants to revive the Kongo kingdom, which flourished for centuries around the mouth of the Congo River. 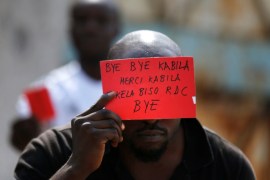