Javier Valdez, an award-winning reporter who specialised in covering drug trafficking and organised crime, was murdered in the northern Mexico state of Sinaloa, the latest in a wave of journalist killings in one of the world’s most dangerous countries for media workers.

Valdez’s killing on Monday makes him at least the fifth journalist to be murdered in Mexico in just over two months, and the second high-profile reporter to be slain in the country over the past few years, after Regina Martinez Perez was found strangled in her home in 2012.

A Sinaloa state government official said Valdez, 50, was shot dead in the early afternoon in the state capital, Culiacan, near the offices of the publication he had co-founded, Riodoce. The official was not authorised to discuss the matter publicly and spoke on condition of anonymity, the Associated Press news agency reported.

Riodoce confirmed Valdez’s killing on its website, saying he was driving about a block from its offices when he was intercepted by gunmen.

He was also a correspondent for the national newspaper La Jornada, which reported that he was pulled from his car and shot multiple times.

Valdez was a nationally and internationally recognised journalist who authored several books on the drug trade, including “Narcoperiodismo” and “Los Morros del Narco”. The latter chronicled the lives of young people swept up in Mexico’s underworld.

President Enrique Pena Nieto said on Twitter that he had ordered an “investigation of this outrageous crime”.

Valdez’s brother, Rafael, said the reporter had been “very happy” in recent days and had not indicated that he had received threats.

“He was very reserved when it came to his work. He never talked about it so as not to drag people into it,” Rafael Valdez told the AFP news agency.

“I asked him several times whether he was afraid. He said ‘yes’; he was a human being. So I asked him why he risked his life and he replied: ‘It is something I like doing, and someone has to do it. You have to fight to change things.'”

According to the New York-based Committee to Protect Journalists, Valdez had told them he was concerned for his safety just weeks before his murder.

“Living in Sinaloa is a threat, and being a journalist is an additional threat,” Valdez said in an interview with the CPJ, according to the group’s website. “We learned how to live in times when bullets are flying around us.”

“The Committee to Protect Journalists honoured Javier Valdez Cardenas with an International Press Freedom Award in 2011 to recognise his bravery and uncompromising journalism in the face of threats,” said CPJ Executive Director Joel Simon.

“His loss is a blow to Mexican journalism and to the Mexican public, who see a shadow of silence spreading across the country.”

Valdez’s murder came less than two weeks after a CPJ delegation met in Mexico City with Pena Nieto and other top government officials, and about a month after the killing of veteran reporter Maximino Rodriguez Palacios in La Paz on the Baja California peninsula.

Mexico ranks third in the world for the number of journalists killed, after Syria and Afghanistan, according to media rights group Reporters Without Borders.

Last Wednesday, the federal Attorney General’s Office replaced the head of its division responsible for investigating journalist killings. Ricardo Sanchez Perez del Pozo, a lawyer with a background in international law and human rights, took over the post. 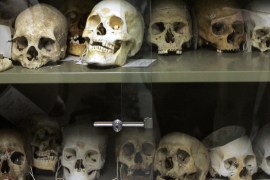 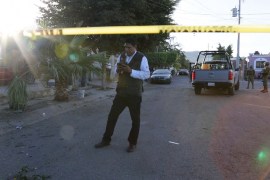