Britain’s opposition Labour Party has launched its manifesto in the run-up to the general election, set to take place next month.

Speaking at the University of Bradford on Tuesday, a short walk from where the party was founded more than a century ago, the Labour leader promised to fund his pledges by increasing taxes on the highest earners and closing tax avoidance schemes.

“This manifesto is a draft for a better future for our country, it’s a blueprint of what Britain could be and a pledge of the difference a Labour government can and will make,” Corbyn told the several hundred supporters who had gathered for the launch event.

People want a country run for the many not the few … for the last seven years our people have lived through the opposite; a Britain run for the rich, the elite and the vested interest

Promising “hope” to Britain’s poorest, he attacked the ruling Conservative Party for increasing inequality since it took power in 2010.

“People want a country run for the many, not the few … for the last seven years our people have lived through the opposite: a Britain run for the rich, the elite and the vested interest,” he said.

“They [the rich] have benefited from tax cuts and bumper salaries while millions have struggled. Whatever your age or situation, people are under pressure, struggling to make ends meet … our manifesto is for you.”

Titled For the Many, Not the Few, Labour’s manifesto promises to scrap tuition fees for students, introduce free meals in primary schools, build a million new homes, and nationalise key services such as rail and water.

Corbyn also said a government run by him would hire more police officers and firefighters, as well as reversing cuts to welfare brought in by the Conservatives.

According to the manifesto, these policies would be financed by measures that include an increase in corporations tax, and tax rises for the top five percent of earners.

On Brexit, Labour accepts freedom of movement will end, but wants to ensure that rights for EU nationals are protected and access to the European single market is preserved.

The platform is likely to be welcomed by left-wing currents in the party, including the Momentum movement, which helped bring Corbyn to power after Labour’s defeat in the 2015 general election.

Ollie Hill, a Labour Party member and Momentum activist, told Al Jazeera that the manifesto formed a radical break not only with Conservative policies but also the previous Labour platform.

“I think the manifesto simultaneously represents quite a radical departure from the economic and social policies of not only the current government but also going back through the [Tony] Blair years and beyond,” he said, adding there was support among grass-roots activists for such a shift.

“[The manifesto] represents something that is the mainstream opinion among the Labour Party membership.

“It’s one of the first time in generations that the Labour Party membership’s views have translated themselves so closely into a manifesto.”

Reacting to the Labour Party’s launch on Twitter, the Conservatives said Corbyn would bring in “chaos” with higher taxes.

Another read: “It is simply not worth taking the risk of this shambles being in charge of our economy and our Brexit negotiations in three weeks’ time.”

Labour currently trails the Conservative Party by a margin of between 16 to 20 percentage points depending on the poll.

We should also bear in mind the drip-drip effects of the Tory (Conservative) press on moulding readers’ reception of Labour policies.

Most put the party on 30 percent, a rise of about five percent from before the election was called.

The number is just a point shy of Labour’s performance in the 2015 contest, but the Conservatives have made huge gains since, moving from the 36 percent they gained in that election to around 47 percent today.

The ruling party has benefited from a collapse in support for the anti-EU UK Independence Party and hardening rhetoric from the party’s leaders on the EU as Brexit negotiations get under way.

Labour is the most popular party among voters aged between 18 and 24, and a large part of its campaigning effort has been invested in encouraging members of the demographic to register to vote.

At the launch, Corbyn insisted “opinion is changing and is moving towards Labour” but the manifesto will do little to turn the tide, according to the University of Stirling’s Eric Shaw.

“I don’t think manifestos – policies – matter that much,” he told Al Jazeera.

“The judgments people make are shaped more by emotional than by rational forces, notably how they influence conceptions of leadership capability and economic competence.”

Shaw, a senior lecturer in politics and a specialist on the Labour Party, also noted the effect the press would have on shaping perceptions of Corbyn’s policies.

“We should also bear in mind the drip-drip effects of the Tory [Conservative] press on moulding readers’ reception of Labour policies.” 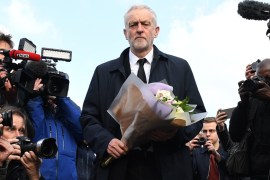