Soldiers who staged a nationwide mutiny in Ivory Coast have reached an agreement with the government on bonus payments and have agreed to return to barracks, ending a revolt that paralysed cities and towns across the country for four days.

Two spokesmen for the mutinous troops said on Tuesday that their financial demands had been met.

“We accept the government’s proposal … We are returning to barracks now,” Sergeant Seydou Kone told Reuters new agency on Tuesday.

Soldiers in Bouake, the epicentre of the uprising and Ivory Coast’s second largest city, have withdrawn into their bases, and cocoa exporters in the economic capital of Abidjan resumed business after a one-day closure.

“We’ve just handed back control of the entrances to the city [Bouake] to the police and gendarmes this morning, and we’re returning to our barracks,” another spokesman for the group said.

Residents in towns across the country affected by the mutiny said that calm had largely returned on Tuesday morning and that banks and stores had reopened.

The renegade soldiers had rejected an earlier deal announced late on Monday.

However, leaders said the agreement had been amended overnight.

According to spokesmen, the proposal accepted by the soldiers means 8,400 mutineers – mostly former rebel fighters who helped President Alassane Ouattara to power – will receive an immediate bonus payment of 5m CFA francs ($8,400).

Another 2m francs will then be paid at the end of next month.

The payments are the remainder of a sum promised by Ouatarra’s government during talks to end an earlier mutiny in January.

The latest revolt began on Friday when a spokesman for the soldiers unilaterally dropped earlier demands for bonuses.

“From the look of things, the government has given in and this [deal] will be implemented … the Ivorian government realised the only way out, because it was a promise, is to keep to that promise,” he said.

Ivory Coast emerged from a decade of political crisis capped by a civil war in 2011 as one of the world’s fastest-growing economies.

Last year, the government unveiled an ambitious plan to modernise the country’s 22,000-strong military, part of which would involve the departure of several thousand men, particularly ex-rebels, who would not be replaced. 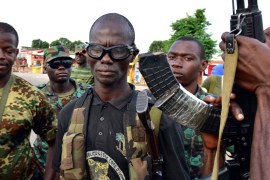 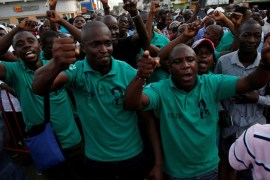