Voters in Iran will be heading to the polls on Friday to elect a new president, in a crucial election seen by many as a potential battleground between Reformists and Fundementalists.

The Reformist front-runner is incumbent President Hassan Rouhani, who signed 2015’s historic nuclear deal with world powers. The fundementalist favourite, on the other hand, is Judge Ebrahim Raisi, who is the protegee of Ali Khamenei, Iran’s powerful supreme leader.

The result of the May 19 election will undoubtedly shape Iran’s domestic politics for the coming years – but will it also effect the country’s foreign policy?

Marwan Bishara, Al Jazeera’s senior political analyst, offers his view on the impact the election might have on Iran’s regional policies and ambitions.

How will Iran’s presidential elections impact its foreign policy?

Marwan Bishara: I expect the impact to be more stylistic and rhetorical than substantial.

Generally speaking, a presidential election in Iran is more likely to shape the domestic agenda rather than the foreign one, because the fundementalist vs Reformist divide that shapes Iran’s election campaigns is more relevant to internal politics.

When it comes to foreign policy, the Iranian president only serves as the second in command to Khamenei, who is the actual head of state and commander-in-chief of the country’s armed forces.

READ MORE: All you need to know about Iran’s presidential election

Iran’s national security, and by extension its foreign policy, lie within the authority of the supreme leader and the Supreme National Security Council (SNSC), which works according to his guidelines.

– The conservative fundementalist  establishment, which controls most of Iran’s economic might through the Islamic Revolutionary Guard Corp’s commercial enterprises and the vast financial resources of the religious endowments. Candidates: Ebrahim Raisi, Mostafa Mirsalim

The Reformist bloc, which prefers political, economic and social liberalisation and an opening up of Iran to foreign investment.
Candidates: Hassan Rouhani, Mostafa Hashemitaba, Eshaq Jahangiri

The SNSC was formed under a revision that was spearheaded by Khamenei in 1989 – the very same year he became the country’s supreme leader.

While the president presides over the SNSC’s dozen or so members and selects its secretary, any decision by the council must be approved by the supreme leader to go into effect.

Once the decision is approved, the president has considerable influence over its implementation – but mostly in the diplomatic sphere.

However, when it comes to national security and regional affairs, other powerful establishment figures such as the head of the Republican Guards, also exercise considerable influence over execution of policy.

But that is not to say that the election of an ideologue like Raisi would not have certain unintended consequences for Iran and its regional policy.

Before we get to these unintended consequences, how then do you explain the change of policy between ex-President Mahmoud Ahmadinejad and Rouhani leading to the signing of the nuclear deal?

Bishara: The elections in and by themselves are important because they express the mood of the nation. The supreme leader doesn’t have as much influence over the results as he has over the ruling establishment.

A new president usually comes with a popular mandate and does have influence. But he does not have the kind of executive authority that, say, a Turkish, Russian or US president has.

In contrast to what many believe, so-called moderates in Iran may use less bombastic slogans, but they are no less nationalistic than the conservatives.

Furthermore, the strategic and regional environment have changed greatly in the time between Ahmadinejad and Rouhani’s presidential tenures.

During ex-US President Barack Obama’s second term in office, Washington was readier to strike a nuclear weapons deal with Tehran. Iran was also in a stronger negotiating position thanks to progress in its nuclear enrichment programme and the US’ failures in Iraq, Afghanistan, Syria, Libya and elsewhere, which emboldened it regionally.

In addition, Iran’s economic stagnation under Ahmadinejad was the main reason that propelled Rouhani to the presidency with a mandate to break out Iran’s diplomatic isolation and improve its economy through increased oil revenues and investments. Rouhani’s resounding victory in the last presidential election echoed loud and clear in the supreme leader’s chambers.

Khamenei was well aware of those challenges, as well as the opportunities that lied ahead and decided, after a direct appeal by the US president, to grant Rouhani’s government the latitude necessary to reach a deal with the US and improve economic relations with the West.

Khamenei himself has approved the deal – even if it arguably violated some of his red lines. And although he remained a vocal critic of the West, Khamenei later asked its critics to seize their attacks on the nuclear deal.

It was clear during the final presidential debate last week how the two leading opposition candidates – Raisi and Mohammad Ghalibaf, who recently dropped out of the race – were more eager to criticise Rouhani for the lack of economic dividends from the nuclear deal, than for its signing.

Iran is likely to continue with its pragmatic policy towards the US and the West in general.

Contrary to conventional wisdom, Tehran has been quite practical in its dealings with the US since the Akbar Hashemi Rafsanjani presidency of the 1990s (following the first US Gulf War), through Mohammad Khatami’s, (following the 9/11 attacks and the invasion of Afghanistan), and even during the Ahmadinejad presidency (following the US/Iranian backing of the sectarian Nouri al-Maliki government in Iraq).

Iran has benefitted greatly from Obama’s decision to change the US’ Middle East strategy from on-shore intervention – Iraq, Afghanistan and Libya – to off-shore balancing. This allowed Tehran to gain considerable power over Iraq and to expand its influence in neighbouring Arab countries, leading to deepening sectarianism in the likes of Iraq and Syria.

Obama’s insistence on early withdrawal from Iraq and his reluctance to intervene in Syria have de facto enhanced Iran’s influence in the region.

I don’t think the next Iranian president, regardless of his identity or ideology, could or would roll back Iran’s gains from the nuclear deal or take the country back into isolation.

What are the unintended consequences you mentioned earlier regarding Iran’s Middle East policy?

Bishara: The advent of a more ideological president like Raisi is likely to complicate Tehran’s regional role without enhancing its influence. If anything, it could very well backfire against Iran.

In contrast to what many believe, so-called moderates in Iran may use less bombastic slogans, but they are no less nationalistic than the conservatives.

“Moderates” like Rouhani reckon that Iran’s would benefit from a certain degree of liberalism and openness to the outside world, while the conservatives, like the fundamentalist Raisi, feed on the sentiments of hostility towards the US. They see relations with the West as corrupting and counterproductive.

Under Rouhani’s presidency, Iran has been more aggressive and indeed more cynical in pursuing its interests in the Middle East than it was under Ahmadinejad – at times trampling over its neighbours’ stability to attain greater strategic and political leverage.

Iran has been very effective in advancing its regional interests under the banner of “moderation” and “reform” as Rouhani justifies and defends Khamenei’s Middle East policies.

A more ideological government would alienate Russia and give the US, Saudi Arabia and Israel more reason to push back against Iran’s strategy in Iraq, Syria and the Gulf region.

Meanwhile, the Iranians are watching with alarm on the eve of the elections, as Saudi leaders are aggressively trying to enlist US President Donald Trump’s support against Tehran ahead of his upcoming visit to the kingdom later this week.

Reports from Washington speak of Saudi plans to buy $100-300bn of US arms and invest $40bn more in the US economy, in the hopes that money will buy them leverage and influence with the Trump administration.

Emboldened by Trump’s rhetoric, Saudi leaders have already threatened to move the “battle” to Iran before Iran spreads further in the Gulf region, soliciting a counter Iranian threat to attack the kingdom.

If such unfortunate escalation continues and Iran elects an “extremist” ideologue, it’ll make it easier for Riyadh, Washington and Tel Aviv to build a regional coalition against Tehran. Otherwise, expect more of the same under a second-term Rouhani government.

Alas, the choices of leadership in Iran, like those in the rest of the region – and beyond? – seem to balance between bad and worse. 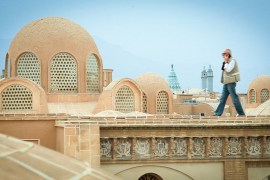 At the height of Iran’s isolation, a fashion designer and an architect attempt to turn an old mud palace into a hotel.