The rain in the Hajar mountains rushed down the wadis, normally dry river beds, and flooded low-lying areas of the Nizwa, Rustaq and Nakhal provinces.

Sporadic outages were reported in some parts of those same provinces on Friday but power supply was later restored.

Oman is a desert country with low annual rainfall. The average yearly rainfall in Muscat is 100mm. In May, it typically receives no more than 7mm. The Hajar Mountains west of Muscat can receive a lot more.

Two people who were stuck inside a vehicle stranded in the middle of Wadi Al-Hajar in the governorate of Muscat were rescued by emergency services in Al Amerat.

Pictures of hailstones, approximately 2cm in diameter, and footage of youths running in the wadis just ahead of the flood went viral on social media platforms.

As the hot summer months approaches, this is typically the dry part of the year in Oman.

Dhofar governorate in the south is the only part of the country that will get reliable rain for the next three months.

During the wet monsoon season of South Asia, this mountainous area is often shrouded in fog and has some light drizzle, especially around Salalah. 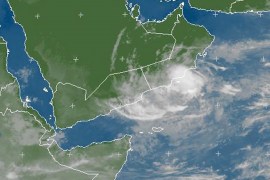 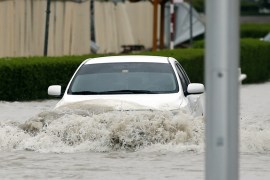 Winds and rains pound Gulf states from Qatar to the Gulf of Oman, causing widespread damage and flooding. 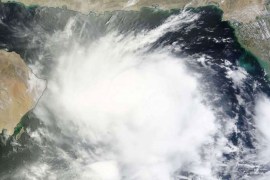