A cholera outbreak in war-torn Yemen has killed at least 115 people and left 8,500 ill as hospitals struggle to cope with an influx of patients, the International Committee of the Red Cross (ICRC) said, citing figures compiled by the Yemeni health ministry.

ICRC said on Sunday that the victims died between April 27 and Saturday.

“We now are facing a serious outbreak of cholera,” said ICRC director of operations Dominik Stillhart, at a news conference in the capital Sanaa.

More than 8,500 suspected cases of the waterborne disease were reported in the same period in 14 governorates across Yemen, Stillhart said, up from 2,300 cases in 10 governorates last week.

This is the second outbreak of cholera in less than a year in Yemen, the Arab world’s poorest country.

Yemen is in the grips of a war between the Saudi-supported government and Iranian-backed Houthi rebels, and fewer than half of the country’s health facilities are functioning two years into the conflict.

Stillhart said hospitals were filled beyond capacity with patients displaying symptoms of cholera, a bacterial infection contracted through ingesting contaminated food or water.

“There are up to four cholera patients in one single bed,” Stillhart said.

“There are people in the garden, and some even in their cars with the IV drip hanging from the window.”

The World Health Organization now classifies Yemen as one of the worst humanitarian emergencies in the world alongside Syria, South Sudan, Nigeria and Iraq.

Critical food imports are also at an all-time low as many of the country’s Red Sea ports are blockaded.

The United Nations has warned that 17 million people, equivalent to two-thirds of the population, are at imminent risk of famine in Yemen.

More than 8,000 people have been killed since the Saudi-led Arab coalition intervened to support Yemen’s government in 2015, according to the WHO. 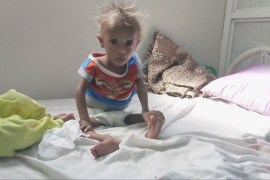 Preventable disease blamed for several deaths as civilians continue to bear the brunt of two-year war in Yemen. 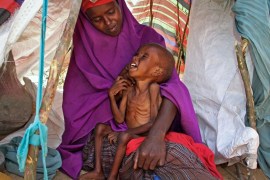